They just keep getting stupider and stupider 😂

Are they just not trying to cover up all these sudden deaths now? It’s like the Vaccine Depopulation Division ran of stuff to blame it on and now resorting to “people are dying because of the something in the air” nonsense. How lazy. I know there are chemtrails but those are directed to effect a certain localized area. This sudden death crap is worldwide. The people getting the death warrant are the ones that took the eugenics poison disguised as a vaccine they were told to take- By the people they trusted in the medical,government,media etc. Im glad most of, if not all of us on VC saw this a mile away and saw past this mass brainwash attack.

People are actually dying because of something in the air: nanorobotics in swarm being rolled out slowly across the world.

A while back I posted a video from a 2019 DARPA meeting, where the presenter explains both the creation of C0V1D and the operational capabilities of airborne nano swarm technology invisible to the naked eye, of which a quantity the size of a pen tip is capable of infecting an entire auditorium.

Given he was discussing with new recruits in 2019, the technology had already been operational a minimum of 15-20 years. The 5G bill passed as the “CARES Act” (See:isKUR of mythology and the word KERES in Greek which means “horns”) and the installation of the wireless neural network, out of the sight of 99% was the main purpose of the lockdowns. It also covered for any deaths that occurred because of unexpected side effects from the nanotech infiltration and EM poisoning.

They are covering for something, while disclosing much. Hiding in plain sight.

To make it clear: this is Lucifer’s Symbiote.

I understand that and some people may have side effects from nano tech and EM and get sick and some may die but the one commonality is the clot shot for the recent uptick in widespread deaths and myocarditis. Now given the common denominator of the ones physically taking the poison are the ones ‘dying suddenly’ I would have to say it’s not airborne but the shot itself. If what you’re saying, which I think you are possibly getting at, is that the poison in the shots are part of a two part system-That these airborne nano tech particles are designed to amalgamate with the person with the catalyst poison running through their bodies, they come together and the person is killed. If that was the case why isn’t everyone dying? If the nano tech is localized lets say activated by 5g, why aren’t everybody in that imparticular area dead? My gut tells me the onslaught of this type of tech has not been implemented just yet(but will be). The area where people are suddenly dying, to me is too random, it’s not in certain areas it’s abstractly worlwide as we have seen.

Maybe nanobots are the next thing after the shots. It’s possible that once the health consequences are public, we will see a lot of “died suddenlys” that are automatically attributed to the shots, but instead come from nanobots or other sources. The depop don’t stop.

That’s exactly what I was thinking as well,perfect cover

You are essentially correct regarding two tier system, although it is a bit of a simplification.

The primary purpose of the “clot shots,” from the perspective of swarm nanotechnology in a mass eugenics and AI neural network setting, was to have people consent to injecting self assembling nano bots for real time bio monitoring throughout the body and brain. See patent WO-2020-060606 filed on 3/26/2020, in which they openly admit in the filing that people are unlikely to consent to brain monitoring for training AI through a block chain neural network, and so they’ll need to develop fun tokens (CBDC) and societal punishments in order to make it a widespread reality. I believe this specific wording is on page 51-56 of the patent.

The shots were certainly necessary for the swarm to pass the blood brain barrier, which nano tech is still not small enough to do in healthy individuals. Instead, they have used the cell manufactured spike proteins (from the mRNA and subsequent DNA modification) from the shots.

For the swarm, those that are vaccinated are “tagged,” as being ready hosts, that is they carry a biochemical signature which attracts the swarm to enter the host. The reason you aren’t seeing mass die offs is for a variety of reasons:

1) They designed, after decades of testing, the system to be principally not fatal. They are trying to keep most of the population alive, as the more nodes on the neural network (each person being a node) the faster the AI learns. This is why they kept the internet so open source for so long; to train the cloud brain.

2) They did not push a “go button,” and release the swarm on the entire populace at once. They have been slowly rolling it out in small patches. This is an enormous logistical operation, which took 24 months of lockdowns to minimally functionally install out of sight in most of the world.

3) We are also not hearing about 2/3 of the deaths, which are being hidden in ACM (all cause mortality statistics). There are huge amounts of reports of UNVACCINATED adult males 55+ that are suddenly incurring stroke like symptoms: loss of memory, vision and/or balance, facial paralysis, vomiting, and confused state, followed by loss of vision.

These cases all repeat the same pattern: the male tests NEGATIVE for C0V1D, and also tests negative on standard stroke tests, but then, if examined closer than standard hospital protocols, show significant microthrombotic (bleeding) events and brain necrosis in the mid-brain, particularly the Cerebellum. The mechanics by this are extremely complex, but suffice it to say that older males tend to have somewhat leaky BBBs that are prone to endothelial (blood vessel lining) inflammation.

Suffice it to say that the cerebellum functions somewhat separately from the rest of the brain in terms of blood flow, having its own arteries that come directly off the spinal column. In microscopy blood examinations from samples of these males, we are finding significant concentrations of nano technology signatures, such as biochemical signatures of oxides from pure metal thorium, thallium and cerium. 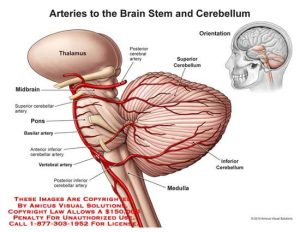 The cerebellum is also the critical part of the brain for monitoring body data, as the stated goal of the WO-2020-060606 patents, as it is responsible for all motor coordination and fine movement in complex material reality.

There are numerous other ways that we are sure they are doing this silently, while keeping everyone quiet.

There is also the muddying of the waters from the shot. Certainly many die simply from effects of that alone.

As always in medicine and life, it is never any one thing, but a totality of many factors creating wider spread trends.

In addition to what Gem said……(my original posted got deleted…so here’s a quick version of what I can remember)……you also have things like:

* Nutritional deficiencies…just because you look healthy doesn’t mean you are….add the jab in and the body may struggle to keep up.

* Family history of heart issues, strokes, etc….good idea to try and figure out who has what, who passed away from what, etc….do immediate and extended family if possible.

* Shedding from the jab….handshakes, kiss, fluid swapping, all dna transfers can transfer the jab ingredients to the unsuspecting unjabbed…..

* The potency of the jab…..some jab lots have produced more issues than others….there’s a site to check lot numbers….

That’s rich. Now the air can kill you too, huh?

What’s next? Oxygen in the air can now cause “SDS” (sudden death syndrome). They’ll say anything to cover for Big Pharma

Clearly, their is much at hand, and while the technology might or might not be ready, their is telegraphing happening. I think it’s both, something else for the unawakened masses to digest as an excuse for the excessive deaths, but a time table for the awakened. This nano-technology exists how sophisticated it is now, well I can’t answer that.

It’s fair to say though IF you were a very smart scientist and were hired to make this nanites, I am sure that the lines would blur between corporate and government. And you would perhaps sympathize with the use of this technology on the general population because you have a PHD and been property indoctrinated to not notice how morally bankrupt it is to do things for the sake of doing it. Many of our brightest are locked away in deep mountain labs..they are also hostages of a corrupt elite.