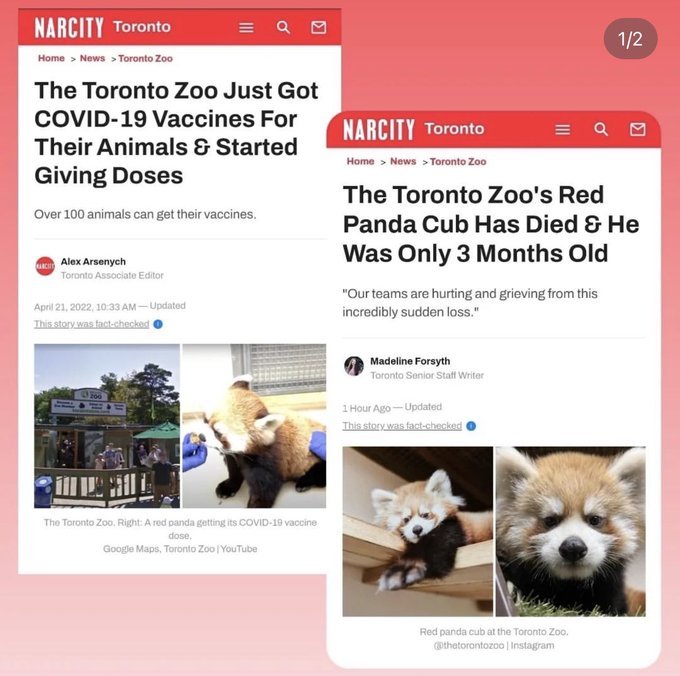 “According to an organizational release,1 on Saturday, October 22nd at the beginning and end-of-day check-ins, the cub displayed no signs of illness. However, on Sunday morning, the wildlife care staff heard the cub vocalizing and then discovered he was lying on his side and extremely weak. He was immediately sent to the Wildlife Health Centre for treatment by the Toronto Zoo veterinary team and put on oxygen, administered fluids, given antibiotics, and warmed up as his temperature was low. Though stable for a brief period, he then suddenly stopped breathing and had no pulse. Resuscitation attempts were futile.”

Even weirder, another red panda died recently in Pueblo Zoo:

“Rusty, the red panda known across the country for his escape from the Smithsonian National Zoo, died earlier this month at age 10 at the Pueblo Zoo.

The zoo does not yet know the cause of death, said Sandy Morrison, marketing and communications manager for the Pueblo Zoo, but his death on Oct. 14 was “very unexpected.”

You’ll notice zoo-keepers on YouTube are always masked as well.

This is infuriating. It’s so unfair to the poor wee animals who don’t deserve this. They have no say. There is literally 0 reason to even be giving vaccines to these animals at all. Red pandas are one of my favorite animals. Poor little guy. 🙁

I read the Reuters “fact” check attached to the article. Zoo stated that the baby panda that died wasn’t amongst the ones vaccinated, only adult pandas were & they are all perfectly healthy. But as with every “fact” check, I always have more questions. There is always some loophole that they use to keep us in the dark and to keep their checks perhaps TECHINCALLY true, but many are deceptions.

They always have such convenient answers to these “fact” checkers. With the answer they gave this time you would think they would have also covered whether PREGNANT pandas were amongst those adult pandas that were given the Fauc¡-ouchy. This baby hadn’t yet been born when they were doing the “v’s” (aka experimental gene therapy drug injecti0ns).

Either way…this is absolutely maddening.

Just… why? For what conceivable reason would they be injecting this into animals?