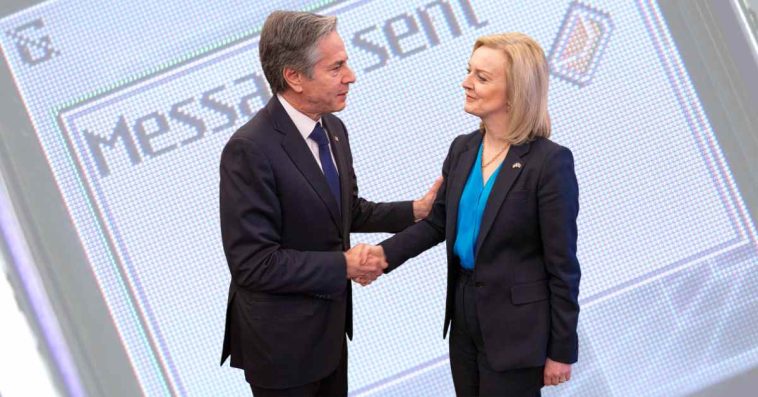 Former UK Prime Minister Liz Truss sent a text message saying ‘it’s done’ to the US Secretary of State Antony Blinken immediately after the Nord Stream attack, according to a controversial online commentator.

“It should be recalled Russia’s defense ministry claimed on October 29 that British navy personnel blew up the Nord Stream gas pipelines last month, a claim that London said was false and designed to distract from Russian military failures in Ukraine.

The government has been urged to open an investigation into claims former Prime Minister Liz Truss’s phone was hacked while she was foreign secretary.

Moreover, the Mail on Sunday reported private messages between Ms. Truss and foreign officials, including about the Ukraine war, fell into foreign hands. The hack was discovered during the summer Tory leadership campaign, but the news was suppressed, the paper said.

However, Kim Dotcom, a self-proclaimed ‘Internet Freedom Fighter’, claims the text message is the reason Russia believes the United Kingdom was involved in blowing up the gas pipeline.

“Liz Truss used her iPhone to send a message to Secretary Blinken saying ‘it’s done’ a minute after the pipeline blew up and before anybody else knew,” he told his nearly one million Twitter followers.

Dotcom, who was born Kim Schmitz in West Germany, suggested the data was obtained through an iCloud hack.”

She’s even dumber than we thought.

She literally had one job.

She’s a fall guy but she isn’t dumb. Nope.

Liz Truss’ only job, then quit. Don’t stop there b***h! What about being ready with the nuke decision!?

i feel like for whatever reason this is information they would want out there, how is a ‘online commentator’ getting this information, they set up a secret plan but she just texts something exposing it all and it gets picked up?