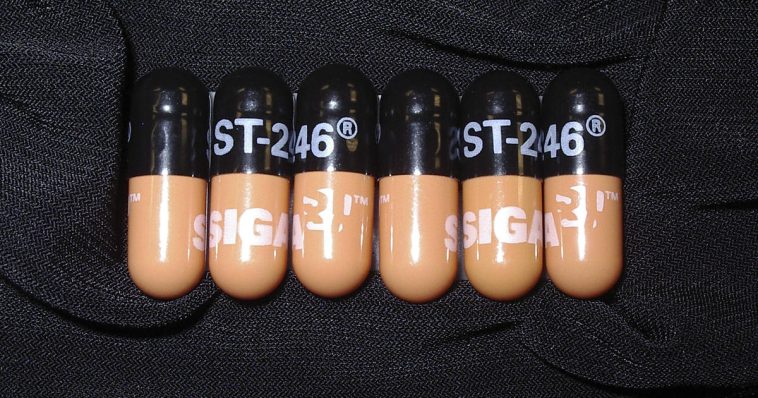 The FDA said the monkeypox virus needs “only a single amino acid change” to evade the treatment.

The drug is dubbed “TPOXX” – with two x’s, which seems frivolous, at best.

The caption to the photo shown of the capsules reads, “Capsules of the drug TPOXX. It was approved by the FDA in July 2018 as the first treatment for smallpox, a disease that was eradicated decades ago, in case the virus is ever used in a terror attack.” It’s a real wonder they can predict these things with such accuracy and timing!! Aren’t we all fortunate??

Quote: “The Biden administration has also moved to stock up on supplies of another smallpox antiviral. Manufactured by Chimerix, the drug known as brincidofovir or Tembexa could offer an alternative to doctors if tecovirimat is sidelined.” — hmmmmmm — CHIMERIX? What is a chimera? A fusion of one or more different animal organizms via scientific tinkering.

FDA really wants doctors to send patients needing this med to NIH to be studied in clinical trials. BUT, doctors can prescribe if they wade through a load of paperwork, and CBS dangles this carrot: “The CDC recently reported early promising results collected from patients who have taken the drug through this protocol. Symptoms improved in three days on average.” so what do you imagine is going to happen, as excruciating as this disease is reported to be?

We know what damage Remdesivir was doing to patients, will TPOXX be any kinder? Don’t forget, there’s always a “vaccine”. Anyone getting a flu shot this year?

I’m thinking the TPOXX contains yet another castrating substance – I don’t think the XX, in light of the massive gay/transgender push is an accident, especially as this is yet another disease, like HIV/AIDS which primarily seems to impact promiscuous gay men. Most of the drugs they use nowadays impact any offspring who manage to survive, as well, so the single hit effectively damages the yet unborn who never get to decide anything for themselves.
Before you say, “But they’re gay, they wouldn’t procreate anyway” this is not true in several ways, especially in the formative “finding yourself” stages, but even for those in married relationships, when they want a baby, often one of the partners will donate their sperm, just as with lesbians where one chooses to use her own egg to carry to term.
Is it inconceivable that the viable sperm available for in vitro in the coming years will be so rare that only certain bloodlines will still be able to create offspring? The new face of the pursuit of a “master race”?