The New World Order (NWO) is a conspiracy theory which hypothesizes a secretly emerging totalitarian world government. The common theme in conspiracy theories about a New World Order is that a secretive power elite with a globalist agenda is conspiring to eventually rule the world through an authoritarian one-world government—which will replace sovereign nation-states—and an all-encompassing propaganda whose ideology hails the establishment of the New World Order as the culmination of history’s progress. Many influential historical and contemporary figures have therefore been alleged to be part of a cabal that operates through many front organizations to orchestrate significant political and financial events, ranging from causing systemic crises to pushing through controversial policies, at both national and international levels, as steps in an ongoing plot to achieve world domination…

The term “new world order” refers to a new period of history evidencing dramatic change in world political thought and the balance of power in international relations. Despite varied interpretations of this term, it is primarily associated with the ideological notion of world governance only in the sense of new collective efforts to identify, understand, or address global problems that go beyond the capacity of individual nation-states to solve.

They rebranded it. Itsnow the Great Reset. Yawn

“a conspiracy theory” termed created by the CIA to originally try to discredit anyone who questioned the “official government narrative” of the JFK assassination. use duckduckgo and look it up. not exactly a joke, now is it? it’s also called, Agenda 21/30. renamed to Agenda 30 because the culling of the herd was pushed back as not enough were, “culled” so to speak but they are working on it. *click on images to enlarge to read details. another “conspiracy theory” hahaha, amirite? 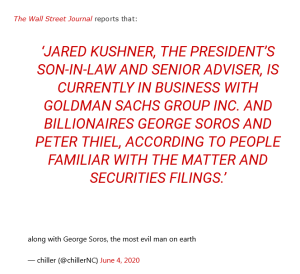 You may have misunderstood the video, and my comment. Both are referring to the way very real agendas that are documented, and openly spoken about by the people orchestrating them, are ridiculously presented as “conspiracy theories” by mainstream sources, such as Wikipedia and Google Search (which are controlled by the people orchestrating the agendas).

This video exposes the agenda, and the mainstream misinformation about the agenda (It’s a conspiracy theory!) while also avoiding censorship on a platform controlled by the people orchestrating the agenda. It’s no joke

What is it that drives one man to feel unable to leave other men in peace?

Well the bible listed 3 things. Devil Satan the beast and some false prophet working with them

Or was it a dragon. I remember being confused because I thought two were one thing

They are all a murderous family and in on it all together. They pretend to hate each other then meet up in secret and have dinner parties.