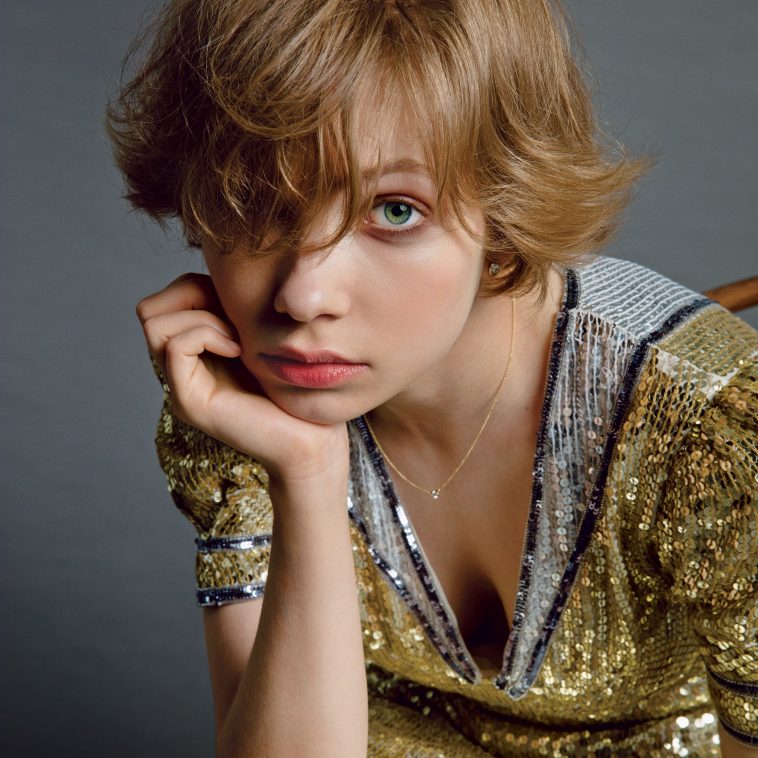 Child prodigy Tavi Gevinson came to prominence at the age of 11 via her precocious fashion blog. That led to her founding online style magazine Rookie, and to a role on Gossip Girl.  This video tour of her teenage closet circa 2013 features some occult items and references:  a necklace of reptilian eyes, a skull ring, a mention that everything in the fashion world seemed “so magical,” a skull mask on the wall, a fanzine called Optic Nerve, an 8 pointed Ishtar star in a scrapbook, a witch sweater, a dress she wore to see a psychic which is also described as “magical,” and an alchemy drawing pinned on the wall.  The tiara of little houses she is wearing is also of note. It looks like an innocuous pastel dress-up toy for a little girl, but it has a very ominous precedent.  The great goddess Cybele from Asia Minor was often depicted in ancient art wearing what is called a “city crown.” Statue of a Seated Cybele with the Portrait Head of her Priestess (Getty Museum).  It represented her sovereignty over the instruments of civilization such as worldly government and building trades like masonry.  She was worshipped as a great stone and as the structures that can be made from stone.  From WIkipedia:  Revelation 17 (verse 18) states that the woman [the Wh*re of Babylon] is actually a representation of “the great city which reigneth over the kings of the earth”.  I think Cybele is the female aspect of the Satan entity, the ruler of cities and men, sophisticated and worldly society. Tavi came to fame as an innocent child and looked fresh-faced and excited in early photos.  Now she is entrenched in the fashion and media world.  If you look at recent photos of her as an adult, she doesn’t look very happy for someone with so much success so young.

Interesting find! I remember watching this video years ago. Who knew this ‘style rookie’ was possibly a baby occultist. It wouldn’t surprise me if her parents have lodge connections since she was so hyped up back then.

I might chalk it up to an ordinary goth teenager phase, which I went through myself, if she wasn’t hanging out with the likes of Anna Wintour while attending middle school. The photo above is from Teen Vogue. My goth phase didn’t land me such things and it doesn’t for most people. I really do think if you pursue the world stage, something supernatural happens. And it comes with a price if you accept it.

She is Jewish and her mother was a Hebrew teacher and grew up in Oslo. Her dad was raised Orthodox Jew…I would bet money on her parents being into some form of Jewish Kabbalah mysticism and passed those teachings to her.

Wow. I didn’t know that. I just remembered her being promoted as a wunderkind.