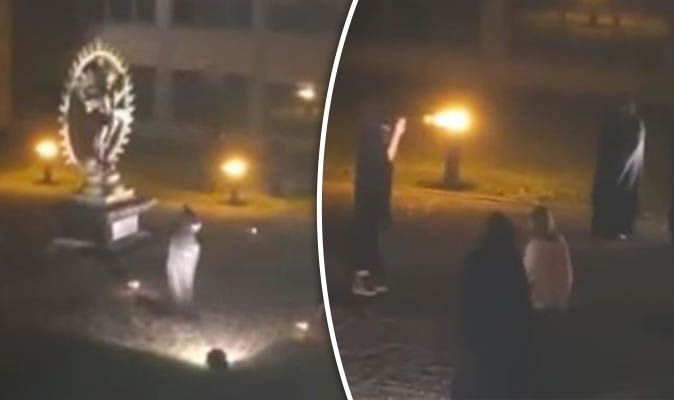 A SATANIC human sacrifice has been staged in the grounds of the European Organisation for Nuclear Research (Cern), the home of the Large Hadron Collider.

When caught, they simply said “oh it’s a silly little prank!” Much like how they explain away Bohemian grove, where they were literally burning effigies to Moloch.

Worth noting that April 23, 2022 they turned CERN back on, which was the first time in over 100 years Saturn, Mars, Venus and Jupiter form a straight line behind the moon….is the CERN Hadron collider a tool by the elites trying to open a portal?

The answer is in the question I believe 🙂

Under a statue of Shiva no less

Shiva has no connection to Satanic ritualism.
The statue or ‘deity’ was a gift from the Indian Gov’t.

Shiva/Kali has every connection to Satanic ritualism. That is one of the primordial dualistic forms of the Satan entity. It’s related directly to kundalini, which is the serpent in Eden and the mechanism of the fall.

Not the first time they’ve done that

Isn’t that Easter i.e. Christ resurrection?
They are mocking

CERN stands for Cernunnos, the horned god. And that thing is built on the site of a temple of Apollo, Apollyon, who is Satan.

bunch of bull$hit here, there is no outer space, the so called planets never form any line behind the moon, all outer space and tales about planet orbits are fabricated, also this “ritual” is obviously some staged prank of security staff members, do you really think they would perform their rituals this openly?

I also think it is not real – they would never do this in public – and why would anyone just stand on a window at night with a camera in their hand? Nope, their sacrifices are way more secret and way more evil.

Yawn. This is 6 years old and mentioned many times in the past.