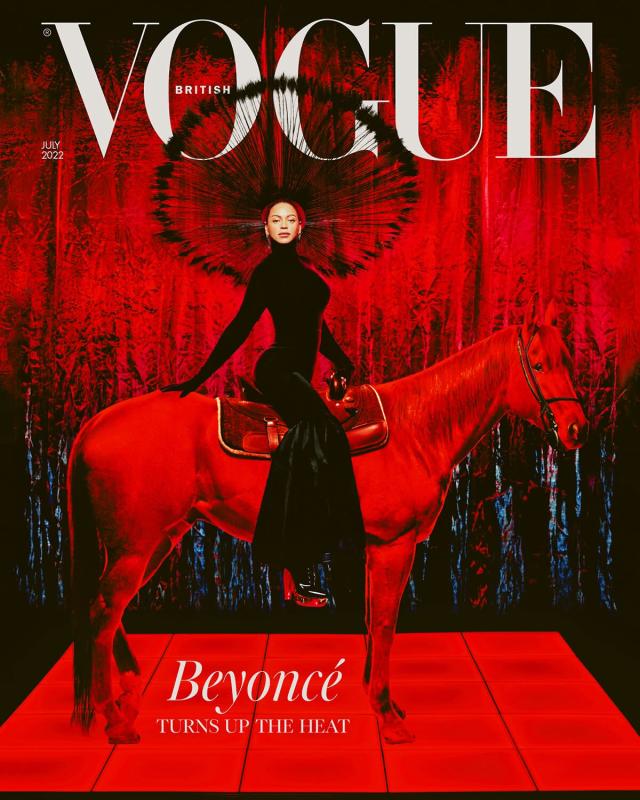 Beyonce on a horse wearing a velvet black dress and large headpiece, with massive feathers coming out of it. The entire image –the background, horse, and floor — all included varying shades of red.

We can see the designer was going for the typical occult aspects of a literal queen from the Renaissance era as her album ‘Renaissance’ comes out next month but this cover screams of Babylonianian mythos symbology with a satanic play on St. George even. I say that because Beyonce has had a very long affection for Ethiopia throughout her career which is another story all together:

“Christianity in Ethiopia dates to the ancient Kingdom of Aksum, when King Ezana declared it as the state religion in 330 AD. In the early days of Christianity, when converts were being persecuted by the Roman government, religious refugees sought sanctuary in Ethiopia. The largest pre-colonial Christian church of Africa, the Ethiopian Church has a membership of between 40 and 46 million, the majority of whom live in Ethiopia, and is thus the largest of all Oriental Orthodox churches. The church Canon contains 81 books and the service is celebrated in the Ge’ez language. The Ethiopian church claims that one of its churches, Our Lady Mary of Zion, is host to the original Ark of the Covenant that Moses carried with the Israelites during the Exodus. Horses have played a significant role in Ethiopia, formerly known as Abyssinia. There are about 2.8 million horses in Ethiopia, more than half the total in the African continent.”

This image depicts a feminized version of St. George as most all Ethiopian mythos suggests and most Abyssinia motifs share a striking resemblances to the The W***e of Babylon occult imagery- It’s also a reoccurring equestrian motif that has been depicted for centuries in Abyssinia/Ethiopia: 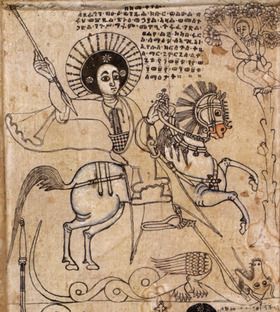 The W***e of Babylon is often seen as a woman riding on a red beast: 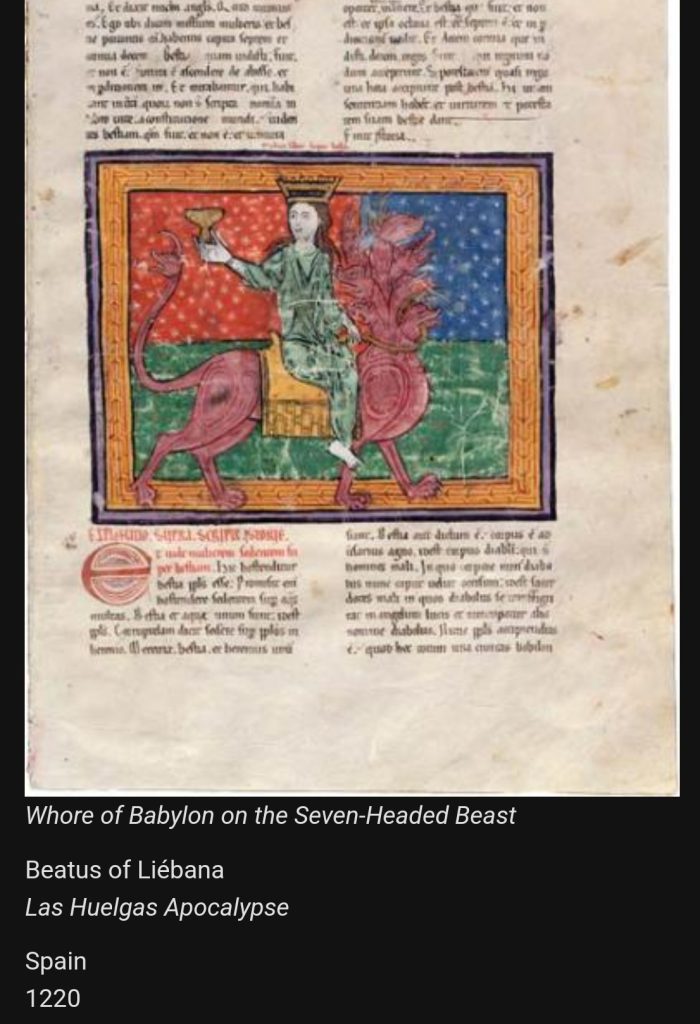 Beyoncé and Jay Z are foolish enough to think they are gods. But then again you can’t blame them with how they are treated by the elites and the sheep they casted spells on. Just be thankful we aren’t in that position.

They are re-incarnated egyptian gods

How do you know this, can you please clarify where you received this information from? Thank you!

Red Horse from Four Horseman? War and bloodshed.
Add: Thank you deletetheelite. You’re the best in this platform

This has to be the strangest magazine cover I’ve ever seen and I lived through the 80s and heavy metal. Looks like a black halo around her head, evil Saint? And the red horse? Ushering in the era of death. She really sees herself as a queen! The arrogance is astounding!

If you can watch the Movie “Metropolis”, released as far back as 1920, at the inception of digital media, you’ll understand perfectly the role of Beyoncé as the Queen Bey,
Everything is a Rich Mans Trick, or should I say the Illuminati’s Trick

All other symbolism aside–
It’s supposed to be a powerful image, but she can’t handle a powerful horse. It’s undermined by putting her on a weakened, broken horse (long, weak back, upside-down neck muscle structure showing a history of poor riding) in a Western saddle with a crappy pad, an unathletic bored/cocked hoof and someone off camera holding the reins. (Nothing against a good Western saddle, but it’s a dead give away in a photo shoot that the celebrity can barely balance.)
Compare the poor horse in the Beyonce picture with the St. George image. Even as an illustration, that one elevates the rider in power. His body is round and in self carriage, with movement and intensity. Then…Beyonce. Womp, womp. Not exactly what she was going for, but exposes the truth eloquently for those with eyes to see.

Let alone her physical biomechanics in the saddle. She is trying to project strength, but if that horse actually took an unexpected step she’d be on her face. Her lower back and hips, the great point of energetic and physical connection to the borrowed power of the horse, are absurdly hollow and stiff.
It is a hollow image in every possible way.

I assumed they intentionally left the reins being held off-camera visible ~ it would have been extremely easy to Photoshop them out, and as we know, a cover photo like this has every detail carefully pored over ~ as a subtle means of signifying that even Queen B is under tight control.

At some point, when the shiz hits the fan, these are the people we will see being sacrificed to sate our need for vengeance and return of equality, while the actual Powers That Be remain safe behind their walls, still holding the reins.

Really appreciate your insights about the horse ~ I would not have known to look for those signs, but since you pointed them out it’s quite clear. Again, a very interesting (and undoubtedly intentional) artistic decision on the part of the designer & photographer.

I love your commentary here!

Wow, nice research OP. Totes riding a red beast like the images you shared. “Black hole sun” and “demonic” are the first two things that came to mind when I saw the magazine cover.

One might also look at that headpiece as The Black Sun, the popular dark occult/”Freemason” symbol, which *also* refers to the a**s, since that *is* their targeted human/animal portal into the dark side, while simultaneously stealing the life-force energy of the victim.

The woman riding the beast in Revelation is christiandom. Together they are the religio-political beast system.

Then one of the seven angels who had the seven bowls came and spoke with me, saying, “Come here, I will show you the judgment of the great prostitute who sits on many waters, with whom the kings of the earth committed acts of sexual immorality, and those who live on the earth became drunk with the wine of her sexual immorality.”

And he carried me away in the Spirit into a wilderness; and I saw a woman sitting on a scarlet beast, full of blasphemous names, having seven heads and ten horns.

The woman was clothed in purple and scarlet,
and adorned with gold, precious stones, and pearls,
holding in her hand a gold cup full of abominations and of the unclean things of her sexual immorality, and on her forehead a name was written, a mystery: “ BABYLON THE GREAT, THE MOTHER OF PROSTITUTES AND OF THE ABOMINATIONS OF THE EARTH.”

The woman whom you saw is the great city,
which reigns over the kings of the earth.”

Know Jesus before the antichrist demands you receive the mark of the beast, and worship him. Your eternal life demands on it. This is serious business. The Bible says we wrestle not against flesh, but darkness and principalities. Can you not sense the rising up of extreme demonic evil in our time. God has allowed you and me to be here in this time. You can choose to be on the side of good and save your soul. Confession of faith is simple: Jesus I believe you are King of Kings and I invite you into my heart to be my Lord and Savior. Please forgive me for all my past sins. Please transform and purify my heart and mind, Amen. (So be it).
May God bless you with his peace that no one else can.
He loves you more than you know.
He will guide you and protect you from the monsters who want to rob you of eternity with Him.
Trust him because He is worthy of your trust. God bless you. All.

This is as close to a perfect answer on here that I’ve ever seen! The whole time reading the article I was thinking, they are missing that connection between Babylon the w***e being a great and powerful city, not person. You laid that out nicely with Biblical references. Then, proceeded to let others know the True Way to freedom by sharing our Lord and Savior’s message. Well done, I will pray that you may continue on in wisdom doing Kingdom Work until He Tarries. 🙏