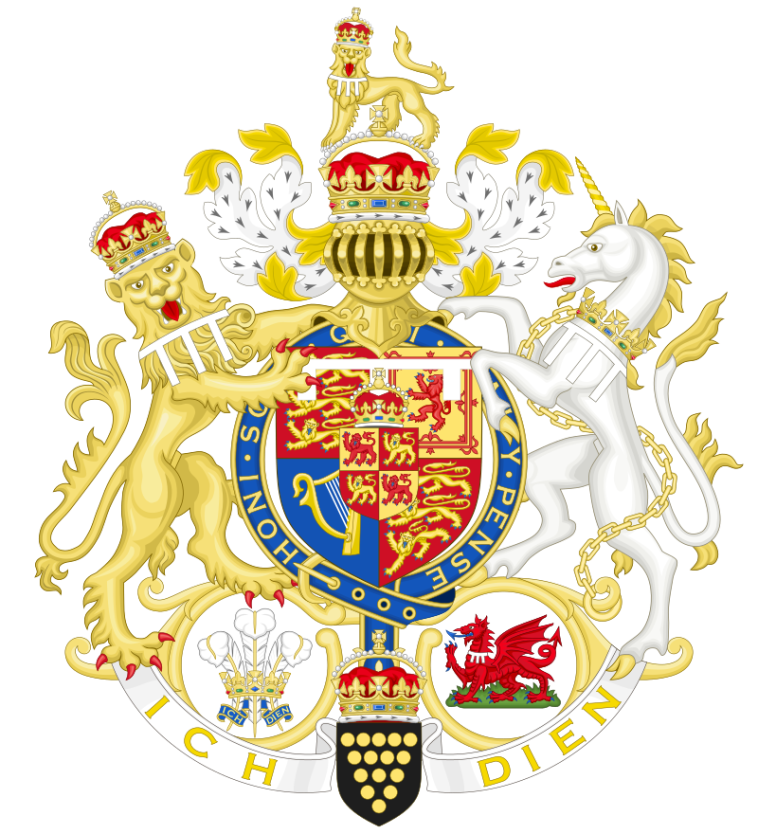 The picture below presents the emblem of Prince Charles and just like many other symbols in this world has a hidden meaning. 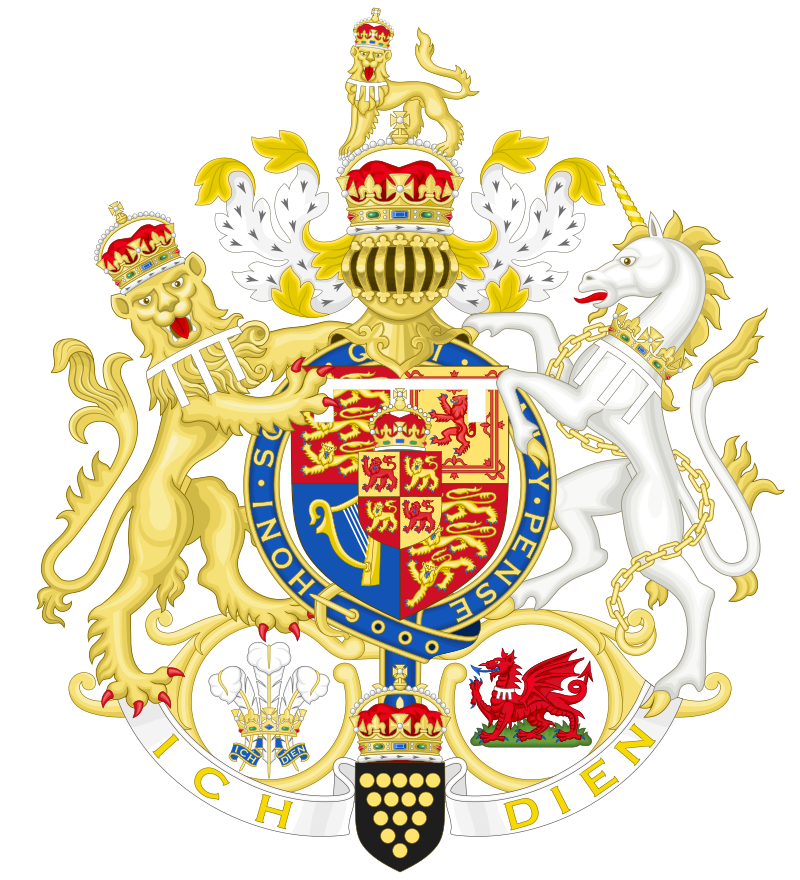 If you ever read the Bible then you might remember this verse which we can find in the book of Revelations. The verse reads:

And the beast which I saw was like unto a leopard, and his feet were as the feet of a bear, and his mouth as the mouth of a lion: and the dragon gave him his power, and his seat, and great authority.       Revelations 13:1-2

Hears another representation of the emblem which I took from the website: https://www.angelfire.com/darkside/net2/1.html     (where you can find some more info about this). 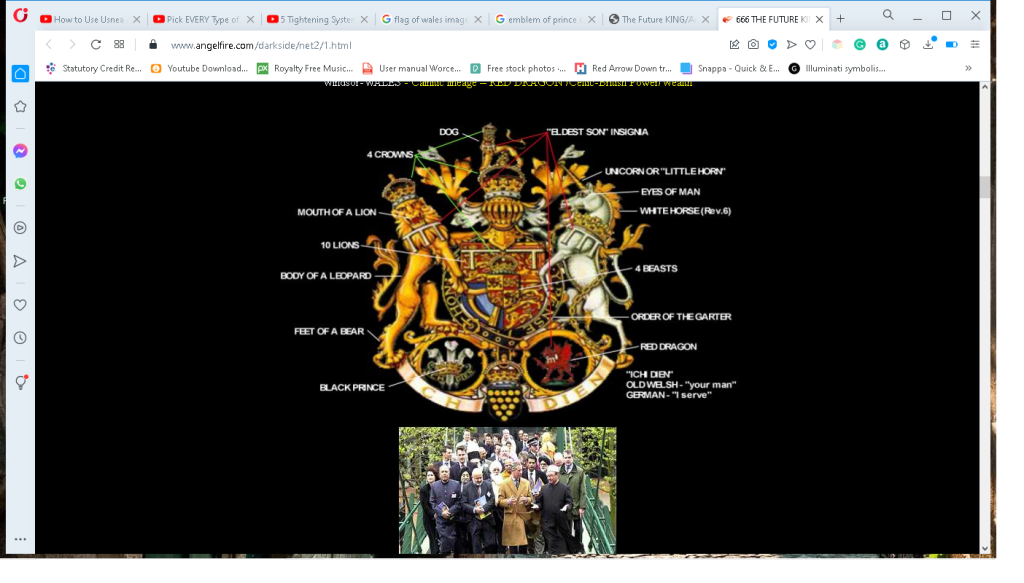 (I can actually count 10 crowns on the emblem. One one the top, one on the big cat, one on the small cat, one around the unicorn’s neck, two at the bottom and four in the centre of the shield on, there are four tiny cats and each of them has a crown on its head).

Could this be a coincidence?

Prince Charles is the Prince of Wales and Wales happens to have a RED DRAGON on its flag. 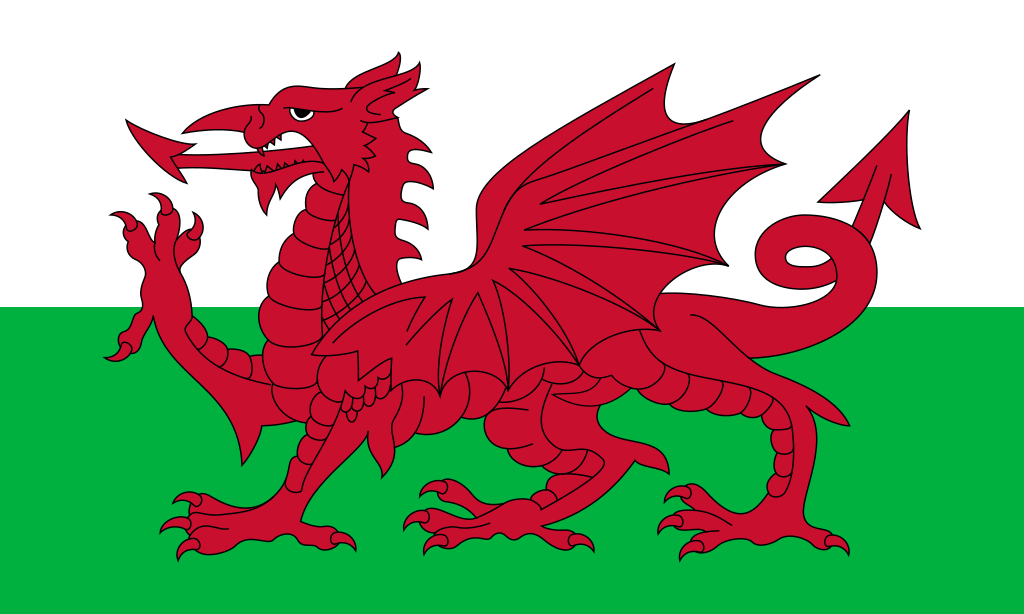 Why RED DRAGON? Well, maybe we can find the answer in the Bible? Let’s have a look at the following verse:

And there appeared a great wonder in heaven; a woman clothed with the sun, and the moon under her feet, and upon her head a crown of twelve stars:

And she being with child cried, travailing in birth, and pained to be delivered.

And there appeared another wonder in heaven; and behold a great red dragon, having seven heads and ten horns, and seven crowns upon his heads.

And his tail drew the third part of the stars of heaven, and did cast them to the earth: and the dragon stood before the woman which was ready to be delivered, for to devour her child as soon as it was born.  Revelations 12:1-4

By the way, that third part of the stars of heaven is 33% of angels who followed Lucifer (unless I’m wrong here).

In conclusion. You might not believe in God, or in the Devil or in the authenticity of the Bible but it doesn’t change the fact that those people do believe in all of that. They are where they are because they made a deal with the Devil they’ve accepted the temptation that Lord Jesus Christ had rejected when He was being tempted by the Devil in the Wilderness. The problem is that there is nothing free in this world and temporary gains aren’t worth the price. The prize is the eternal destruction.

Enter ye in at the strait gate: for wide is the gate, and broad is the way, that leadeth to destruction, and many there be which go in thereat:

Because strait is the gate, and narrow is the way, which leadeth unto life, and few there be that find it.

You are on the right path. Dig deeper into the Dragon bloodlines. They are but one of the diadems on one of the horns.

It’s a lion and unicorn not whatever creature you said is from the bible. I think you must be a midget, that’s one hell of a reach

It’s a lion with the body of a leopard and the feet of a bear to be precise! And even if I were a midget that’s hell out of reach, would it change anything?

I’ve been following this one for a while.
Merovingian bloodline (Stuart bloodline, Diana) they believe, goes back to Jesus through King Dagobert the 3rd. (not that I believe this part)
Windsor / Saxa-Coberg Gotha (profane bloodline of Cain)
The chemical marriage of the sacred and profane.
And it’s not so much that this is about the Royal Family being the Anti-Christ but rather that King Arthur, the Once and Future King, is the Anti-Christ.
The Sword in the Stone resembles / represents the holy cross.
William was labor induced during an eclipse, during the solstice.
He was micorchipped at age 12.
Prince William’s middle name is “Arthur”.
The last three letters of his name William… “I AM”
“I AM ARTHUR”
William was the 999th initiate of the royal secret society The Order of the Garter. They even aired his initiation on C-Span.
The Order of the Garter was founded in 1348 by King Edward the 3rd to bring fourth the Once and Future King. King of the World.
Or is it Prince George??
When Kate Middleton first presented their youngest child Prince George, she just happened to be wearing the exact same dress that Mia Farrow wears in a movie about the mother of the Anti-Christ, Rosemary’s Baby. Councidence?? No way.

Wow… I have thought the very same thing! I’ve been thinking that it is William also, he is very well liked by everyone, charismatic and his birth and numbers (999) line up. George is possible too.

It can’t be his son George. He is still a child and is still going through their purity harvesting rituals. The Antichrist has to be an adult now.

Edit: I totally forgot about Kate Middletons rosemarys baby dress while holding him. I still do believe the Antichrist is a adult by now. But it is possible 2033 could be George’s year to shine.

The royal family is one of the contenders for the crown of The Dark Lord. Well versed in his symbolism and practitioners of Black Magick, The Queen is a descendant of the false prophet Mohammed. They have attempted, but not succeeded, in birthing an antichrist.

They have lied and claimed to be members of the Davidic bloodline (from Jesus) in order to keep others from finding The Holy Grail. No Merovingian ever knew God.

A humble man, now 33, and a carpenter in his younger years, born illegitimately to protect his life, is the only one alive that carries this grail

The Romans said they hunted down David’s descendants after Israel was destroyed. Their oldest ancestor is King Charlemagne. On the genealogy website exposing them they have no real Merovingians present.

Yes we were and are hunted by The Dragons. None of us were Merovingians, that was a false claim made to establish a false “divine right”of rule by men that sought Earthly power that usurped the satanic, pagan pope’s claim to being “viceroy of God.”

The few Aryeh Yehudah that remain, and particularly those of the Davidic Line, hide in plain sight. You would not recognize us as Jews, and none are or ever were earthly Kings. It is forbidden to seek earthly power, except in the case of a divine revelation asking for the glorification of GOD by such means. However, any earthly power we gain will ultimately require an equal sacrifice, as the case of Jesus.

Many of us have even resorted to publicly espousing anti-Semitic views to hide (ie Nikola Tesla) while doing great works for the world.

Man. Where are you getting that the Queen of England is Muslim? And false prophet – I don’t know – “a prophet unto Moses”, Mohammed fits that description far better than Jesus.

Yes. The Merovingians usually have King Charlemagne as their oldest ancestor. And you know what’s funny is that when I first learned about him in high school they had people who speculated that he wasn’t a real king.

The mia farrow dress was with her 3rd child, Louis, not George. https://www.dailymail.co.uk/femail/article-5665301/Kates-Lindo-Wing-dress-looks-like-Mia-Farrows-Rosemarys-Baby.html

The evil world uses a lot of blatant signs and symbolisms of Satan, stark on our faces. And to me, this is an indirect revelation of God of what he directly revealed and prophesied in the Bible.

Let him that has ears and eyes listen deeply and see closely the truths of the Bible that God is showing as a warning of these evi last days of earth.