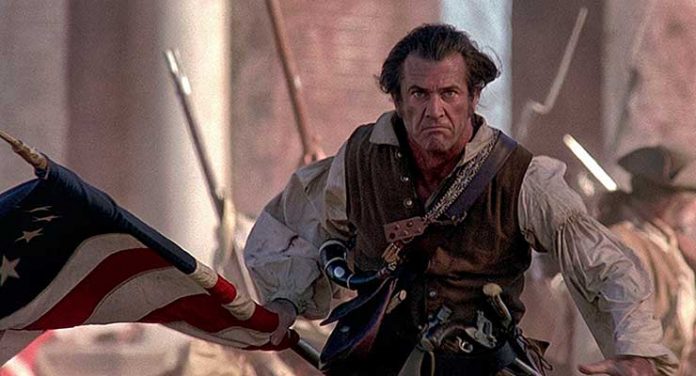 When any earthly king or authority tries to subvert and supplant the laws of nature and of nature’s God, violating the sacred free will He instilled in us, that entity has now overstepped its bounds and gone rogue. It has given itself over to the Prince of Darkness. We cannot follow the dictates of any man or woman who represents this evil cabal, whether he be in Washington or in London, in Paris, Davos, Geneva or Jerusalem. We’ve been far too tolerant for far too long and that’s why we’ve come to this dark place in history.

So what’s any of this have to do with The Patriot? After watching it again, I saw plenty of parallels between then and now.

For starters, when evil shows up and bares its fangs, you should expect that at least 97 percent of the people will be caught off guard and will cower. They’ll simply never show up. Most will not even recognize the evil for what it is, but even among those who do, they would rather believe lies than truth. It’s always the path of least resistance to deny the truth and follow the lie. The bigger the lie that is told to them by an illegitimate earthly authority, the more committed to it most of the truth-deniers will become.

Benjamin Martin found himself in this camp, with the truth deniers, at the beginning of the film. He didn’t want to believe that the tyranny of the British Crown was really as bad as others were making it out to be and tried to justify his inaction.

We see good people engaging in this same type of stubborn denial today. Even if the forces of darkness get their minions to pass laws or enact policies that are so blatantly evil, something like, say, “family friendly” drag queen shows presenting barely clothed men dancing erotically and simulating sex in front of young children, you will hear the 97 percent try to justify it or at least downplay it, as somehow not as bad as it looks. We are just overdramatizing it. It’s not grooming. It’s artistic expression or some other bizarre construct. They’ve already chosen to which authority they will submit — rather than choosing to follow the ageless wisdom of the One and Only definer of what’s right and wrong, the God of the Bible, they choose that which seems most convenient and expedient at the moment.

They listen to the whispers: Don’t get involved. That’s not your fight. Leave it for someone else. Another person. Another time. Another day.

They will always find some reason to cower, bend, back down, cut a deal, compromise.

Lesson number 1: You can’t negotiate with the devil.

Lesson number 2: The initial volunteers will only get you so far when fighting a committed, determined, well-organized army of demons – and the British were all of the above, much like the globalists and leftists coming for our children today. Eventually you will need to call in backup and that means going out to recruit fresh foot soldiers.

Lesson number 3: Do not falsely judge your neighbor based on his background being different or not as pristine as yours.

Lesson number 4: If you’re living in evil times and you choose to be on the side of good, you can only remain anonymous for so long. You will eventually have to embrace your role as an outspoken voice of resistance.

Lesson number 5: You won’t always see the results of your fervent prayers, your hard work, your faithful service, at least not immediately.

Be not conformed to this world but transformed by the renewing of your mind.

And knowing that the more we become like Him, speaking truth to power, the more unpopular we will become in the eyes of the world.

If the world hates you, keep in mind that it hated me first.

In other words, count the earthly cost that will be involved in receiving that eternal reward, and hearing those words, “Well done my good and faithful servant.”

Benjamin Martin was loosely based on Francis Marion, the Swamp Fox (yes, even the Disney series with Leslie Nielsen was based on him as well).
He was essentially the Batman of the American Revolution.

Very good analogy!
I’m affraid the battle will be individual since so many good people decide it’s not up to them to make the change. Many could indeed make a difference, together, a few could only hold the evil for a little bit more.
I think since we are so divided in the actual context, with so many evil things happening the battle is individual and for one’s soul. It will literally reduce to gaining the last ones standing one by one. Let’s hope there still are those few in every nation