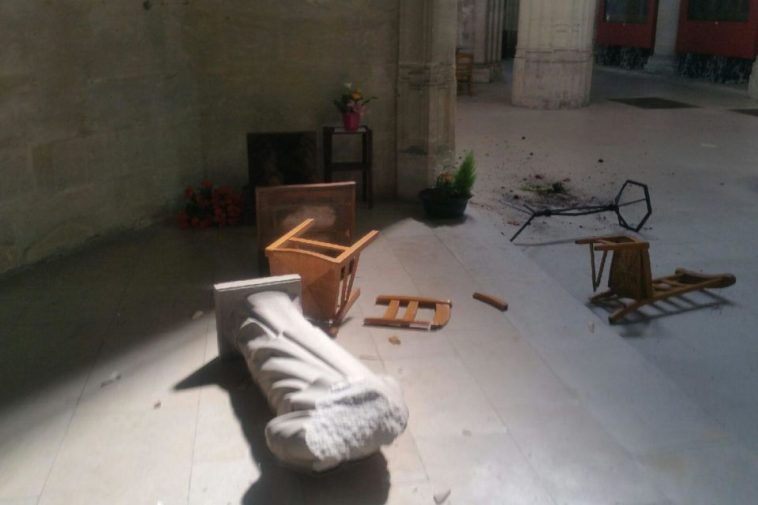 It was an epic start to the year. If it is often accompanied by good resolutions, January 2022 will not have really spared the Catholic Church, victim of an astonishing wave of thefts and desecrations throughout France. It all started in the Paris region, the ball being inaugurated by an “isolated and fragile” man arrested after destroying two statues with an iron bar in the Saint-Denis basilica in Argenteuil.

In the aftermath, several churches suffered night attacks. First that of Saint-Germain de Vitry-sur-Seine (diocese of Créteil in the Val de Marne) on the night of January 6 to 7, where damage and desecration, in particular a theft of hosts, were perpetrated. Then the churches of Saint-Pierre in Bondy and the church of Saint-Germain-l’Auxerrois in Romainville on the night of January 9 to 10, with thefts and desecrations also, causing parishioners to be amazed. Gerald Darmanin himself was moved by the situation.

The soap opera was then far from over…

A relic stolen from Paray-Le-Monial (January 8-9): In parallel to the Paray-Le-Monial sanctuary, a precious relic of Saint John Paul II was stolen on the weekend of January 8 and 9.

A man in a djellaba armed with a knife arrested in the basilica of Blois (January 25): Another tragedy was most likely narrowly avoided in the basilica of Notre-Dame de la Trinité a few days later in Blois, Tuesday January 25. Carrying on him a Koran, a large knife and a djellaba, a man with suspicious behavior seeming to be actively looking for the priest was arrested by the police, warned by a member of the management of the sanctuary. He was then placed in a mental institution.

Attack thwarted in Toulouse Cathedral (April 8): Causing general panic on the morning of Friday April 8, a man appeared during mass in the Saint-Etienne cathedral in Toulouse with a package containing a homemade explosive device without a system fire. The entire building and neighborhood was evacuated in the morning, and the suspect was finally arrested. He was known to the police, but not for acts of terrorism.

A priest and a nun attacked with a knife in Nice (April 24): At the Saint-Pierre-d’Arène church in Nice, on Sunday morning April 24, a man stabbed Father Krzystof Rudzinski violently, one of the vicars, especially in the thorax. A septuagenarian nun, Sister Marie-Claude, who was trying to disarm the attacker, was injured in the hand. His courage was widely praised in the press. The assailant, presented as “unbalanced”, was quickly arrested and the priest and the nun both survived.

A bloody man vandalizes the Notre-Dame de Boulogne-sur-Mer cathedral (July 26): The man would have let himself be locked inside the building, known for its famous Black Madonna. Arrested in flagrante delicto, he was placed in police custody and had to undergo a medical examination to assess his psychiatric condition. The damage amounts to several million euros.

Two young Catholics attacked in front of the Sainte-Bernadette de la Louvière church in Rambouillet (September 4): They are a 15-year-old girl and a 17-year-old boy, brothers and sisters who were leaving mass with family. The attackers would have clearly targeted the two young parishioners for their Christian affiliation: one of them would indeed have declared: “dirty racist, dirty Catholic, dirty white person”, had reported CNews.

The unbolting of the statue of Saint Michel in Les Sables d’Olonne (September 16): A ransacked Saint-Pol-de-Léon chapel in Brittany (October 10) Fractured tabernacle, statues destroyed and stolen…

Insecurity and increasing violence in the parishes of Nantes (mid-October)

But other worrying and more insidious phenomena should also be noted, such as “people who steal candles, spill wax all over the floor, defecate in the confessionals” or, as the priest reported, “a person who puts herself completely naked” near the altar of the church…

Poitiers: a statue of Christ victim of vandalism at the Saint-Porchaire church

Saint-Pierre-le-Vieux church in Strasbourg: the statue of the Virgin Mary vandalized for the second time

Bondy (93): Thefts and desecration of the Saint-Pierre church

Pas-de-Calais: a man judged for the fire of four churches

Avranches (50): an individual shouts “Allah akbar” in a church during Sunday mass

Toulouse: insulting tags on the church, the statue of the Virgin and the monument to the dead of Saint-Martin-du-Touch

Saint-Germain-en-Laye (78): a Muslim bursts into the church during mass and beats up a parishioner. “He accused the Church of being racist. He called us sh**** Christians”

Poitiers: far-left tags on the door of a church

Rouen: Two young people climb on the roof of the Saint-Maclou church and destroy one of the pinnacles (small stone tower) of the building. “It’s a bit tiring, whatever we think, it’s our heritage”, reacts an elected representative from the left

Chairs and pannels has been taken down and statues broken by an american person suffering mental disorders.

And it’s not better in the rest of the world, i have just seen that yesterday even thirty Christian tombs were vandalized in the cemetery of Jerusalem, in Africa or in the East there are attacks almost every day, let us pray for all those who are martyred for their beliefs. But Europe is following the same pattern and is becoming a country where it will soon be forbidden and a minority to be Christian (not to mention anti-Semitism which has never been so normalized).

I’m Catholic and Cajun French. This saddens me greatly.