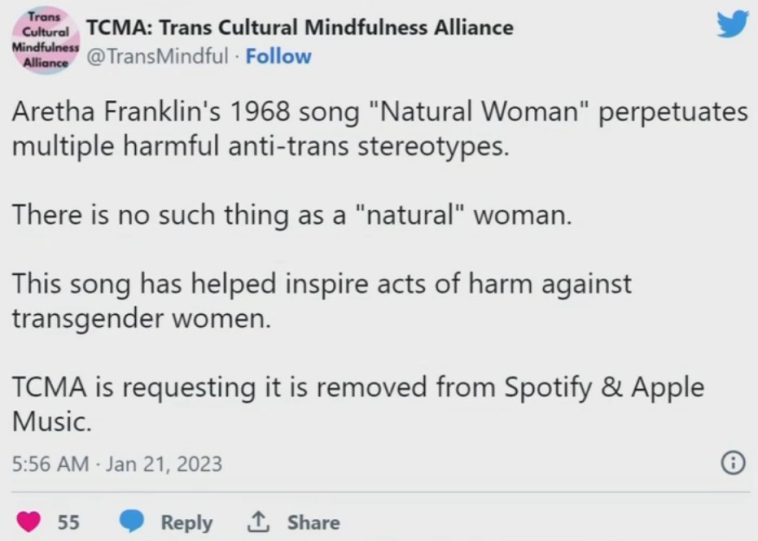 Standing for Women Founder Kellie-Jay Keen says it’s “really hard” to ignore the “misogyny” of the trans-rights movement as Aretha Franklin’s song ‘Natural Woman’ was recently slammed as offensive to trans-women. “Being a mum, that is also being attacked, we’re now called birthing persons or pregnant persons,” Ms Keen told Sky News Australia. “I don’t think many women really know how much we’re hated – I hate to say it … I don’t have a victim mentality, but it’s really hard to ignore the misogyny of this particular movement. “It means a man who says he’s frightened to go in a man’s toilet – his words are more credible than a woman who says she doesn’t want that man in her space.”

why are we allowing a small group dictate to us what is true or not?

It is a small group who dictates indeed. But it is not those trans lovers. Another small group of people is in power ( well actually satan is in power for now and in this world).

But the group in power steers slus in a way. Those trans lovers are just the useful idiots for this job.

Very true. Even genuine transsexual people are against this bs.

You just described life on earth.

Maybe because we are too lazy to risk the comfort of our routine?

Recently, a relative acknowledged that he got vaxxed so he could go on with his comfortable life routine.

I realized most didnt want to get vaxxed (remember the first polls showing +80% of people were against vaccination?..).

They just wanted to go one with their comfortable zombie-like life.

The worst thing is that, despite now knowing its harm, he will get vaxxed again if mandatory. So his routine doesnt change.

It hurts to see this. Unfortunately alot of people are falling for these lies. ” The ‘experts’ know better right? Lets follow them” is what i hear often.

A natural woman is something all woman should be proud of to be. Natural born woman. No fake implants. No p***s. Be proud of yourself. Know that many natural men like me still appreciate you.

This is a case of people making everything about them.

It’s such a tiny bunch of activists but the power they wield is not grass roots. It’s bought and paid for. If men had intentionally set out to utterly ruin women and girls lives they couldn’t have made a better job of it than these terrible people.

They can’t see that they are just another cog in the transhumanism eugenics experiment. It’s a death cult at this point – the welcome it and as you say – make this an ego driven endeavour.

Might be time to stop giving these people attention. It might lead them to believe that people care about their opinions.

I made a decision after COVID to start calling out this bs in your life. I unfortunately work in a field that embraces this craziness but I can’t sit by anymore. The adults have to come back in the room now and call it out. No one is stopping you from exploring who you are and who you sleep with. The line is drawn by telling me to believe something that is fundamentally untrue. I won’t be compelled to talk crap just for feels.

We should let the clowns live their clown life. They wouldn’t be so important if we all stopped relaying whatever stupid sh*t they have to say.

its time to just start ignoring groups like this altogether, by everyone

Women are not natural?

They are trying to say there is no such thing as “a natural woman” just like I was taught when I was young that there are no such thing as “fully straight people”. They are liars. Absolute 100% full and natural liars.

Calm down guys. Its satire.

This is a great theme song to hum or sing to them while paying by, just for us, the natural women who are being ruthlessly attacked by these scum. Every year gets more dangerous in the restrooms for natural women and children because of men in body drag. Be proud of your natural woman parts and blood

Unfortunately this post was made by a fake trans support group, so this post is disinformation. Had to learn the hard why. Please remove it if you can.