What does this have to do with Whiskey?-J&B Whiskey Holiday Ad with Grandfather and transgender grandchild.

They were certain to include the “Queen of Heaven” Innana, and her eight pointed star, and the middle letter of the mark of the beast, Xi Ξ

All are references to divine child sacrifice.

Innana was called Ea in a male form exoterically, and was considered, like most Luciferian deities of blood sacrifice and ritual sex MAGIk, a transgender/hemaphrodite esoterically by the priests of Ba-Ba’al-on. Often hemaphrodites and/or transgender urigallus were used as the “priestess,” of Innana.

The age of the boy, 26, representing the sacrifice of the “27 club,” 27 being the number of heads, horns, and diadems of the first beast in revelations. 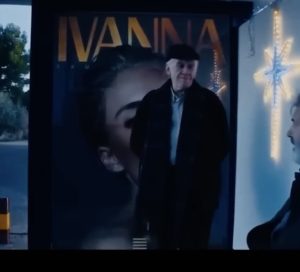 I always enjoy the in-depth knowledge you bring! If you aren’t on the VC team yet, you should be!

Thank you for seeking the Truth CajunGirl! Wisdom is power 🙂

Good analysis gem! I’m guessing they have on the clock ‘warlocks’ or highly informed subliminal type occult imagery specialist working behind the scenes at all these advertising companies…Where do these people come from? They are obviously trained in the dark occult and doing this is their livelihood.

This really comes back to something that is seemingly as mundane as job selection and promotion. Think pyramid power projection.

All of the major corporations are owned and operated by boards replete with NW0 bloodliners and loyals. No others pass the glass ceiling of middle management, being bogged down in career advancement by negative performance reports, a cruel boss, or other road blocks thrown in there way. Those born in the club and from the club, or hand signaled by Lucifer, are allowed to advance without these blocks and often with career leaps in succession (from class president to Governor in a decade or so.)

Rishi Sunak, whose name itself means “Divine Solar Guru,” is a good example. Does anyone believe this man at 40 something fed the silver spoon is really the best of Britain? He can barely fumble a sentence on a teleprompter… but he’s from the right family and was arranged a marriage to another dragon family that now runs a tech monopoly.

Skull and Bones from Yale alone, with a tiny selection class each year, has had so many presidents, senators, Supreme Court justices, multinational executives, etc. that it is a statistical impossibility by chance. Bones men come from bloodline families of prestige and they They favor each other cross generationally, and those in power are bound by oath to do so.

Now in terms of advertising agencies, Mad Men was a clear revelation of method, except they left out the handshakes. Instead there was a club that was kind of sort of defined but never really talked about. And so within these agencies, the trained and initiated illuminists are picked for leadership positions, such as directing, plot writing, project leaders, and department chiefs. And through this they ensure the messaging, usually received from much higher sources, follows the script. The director knows and dictates it to the scene director (who probably knows or is a lap dog), and it gets done, requiring the department head to sign off, as well as the client company executives. All the necessary people are in on the game.

This is how you get whiskey and cross generational transgenderism paired with very specific ancient Babylonian symbolism, and 2/3 of the department has at best a faint idea. If director says, mr. “prop guy who hopes one day he gets a chance,” isn’t going to question.

Gem…….does the same apply with the ladies Luciferian club in business or are most of the ladies ‘behind ‘ the scenes as wives, mothers, girlfriends, etc etc etc?

What if both a Luciferian man and women were up for the same job? 🤔

A quote from the high “priestess” of Inanna in the 2200s BCE, called Enheduanna:

Whiskey, made from barley, is to make the world drunk on the wine of tbe golden chalice of Babylon (as described in revelations 17) Barley was sacred to Innana in the festival of Akitu, and it’s reaping is referenced in Matthew 27 for the desire to murder Yeshua, The Truth, through the word κατακριθεί which is Kata= Down Krithe = Barley.

The ladies Illuminism clubs have essentially the same rules. The most well known of them is The Order of the Eastern Star.

In reality, the Luciferian orders have been highly patriarchal. History of the “men of old, men of renown,” is undeniably controlled by Luciferian males.

You do have the examples of Hashepsut, the female pharoah who claimed to be Hathor incarnate (and NeferuSobek who was Isis-Sobek incarnate) that was declared male and wore a golden phallus.

Generalising, there are a few high priestesses of great importance, reserved for many superior ranked positions (ie Angelina Jolie or Hillary Clinton) while the ladder climbing is left more to the Males because they are far more numerous in the orders.

Female initiates are quite prevalent in Hollywood, business, and politics, and generally speaking rank, not gender, determines who gets what privileges.

I have lately noticed Kate Hudson. Her name is designed to be bland, but she is clearly of huge stature. Lots of young in hollywood hang out with and resemble her.
She is interesting because her family looks like a major success story in a poisoned industry – her ‘parents” have been together a long time and seem happy.
Kate is also interesting because she is so publicly likeable. She doesn’t let anyone see anything beyond the persona, and that seems wise. Her family is held in high regard by people who just see the modern success story and can’t believe they all like each other.

Girl is insanely rich. Can’t recall why, where, how, etc, but she was born into it. She is more than she seems.

Thank you Gem……….good to know Lucifer is an equal opportunity employer….

….I also think Sekmet is in that list too, no?

Oh, I would really appreciate it, Gem,, if you could answer my questions from the ‘Harry Styles’ post……I’m interested in your thoughts on them….

….Also, that same post had my AY language quextion that you offered to add more info too…..I also did some search8ng into Noah’s son, Shem’s sons….I can add my thoughts to that post if you wish to continue with that question….

Id love to hear your thoughts on the sons of Shem. I will try to get to those questions on the styles post ASAP.

Hoping you and your loved ones are blessed as we reach the time of the sun’s retur and perapsis. Those birkland currents are flowing out hard right now.

Thank you, Gem, for all help and kind thoughts for my family – I hope you and yours are doing well also!

……I am still struggling with my health………..so I’m curious as to the dates of these amplified BCs and the possibility of a BC-health correlation?

Thank you for taking a look at my questions……..very much appreciated.

You obviously have a wealth of knowledge on the esoteric occultic side of life and how it works, were you once a part of it and are now whistleblowing or something else? Just curious 👍

No, I have taken no oath and never will. Scripture forbids it. Yeshua said:

But I tell you, do not swear an oath at all: either by heaven, for it is God’s throne; or by the earth, for it is his footstool; or by Jerusalem, for it is the city of the Great King. And do not swear by your head, for you cannot make even one hair white or black. All you need to say is simply ‘Yes’ or ‘No’; anything beyond this comes from the evil one

The allusion to Illuminism and masonry, swearing on a white and black checkerboard, and on Geb of the Earth and Uranos of the heavens is evident.

All of this information I give is in the scriptures for those with eyes to see. Most of it can be learned if one studies the primary source ancient artefacts without being brainwashed by text books and media.

The illuminist cults are doing the same as they have done for thousands of years, as the say “there’s nothing new under the sun.” Everything do is based on corruptions, hoarding and twisting of the Aryeh Yehudah teachings, and so, it is like seeing a devious child poorly mimick what you’ve taught them, and then try to hide the cookies under the bed.

In Matthew 5:38 the translation “the evil one,” while not incorrect, erases a revealing meaning. The word for evil is:

This is a compound word that combines:

And so the name for “the evil one” used by Yeshua here quite literally means:

“The toilsome lover of twisting.”

It means “To tell/ask” and so the word Ponerou also means:

“The one that Tells Twistings.” Which on a simpler English would be “The Deceiver.”

I totally agree with your assessment, because I had the direct experience. Very frustrating. I was in a service industry for over a decade, but never advanced, but saw lesser knowledgeable people advanced and in great positions, while I was always getting into minor trouble made major, I could go on about it but will spare you 😊 but now I know why.

A E
Reply to  Chain heavy

I believe that is entirely true. If you were within YHWH’s system for advancement (by faith) hoping to make it in Lucifer’s, you were wrong place, no understanding. Put both feet fully in and things will change. Best to you and yours!

In the modern service industry, they don’t want anyone that thinks for themselves.

It is purposefully designed to reward those with a slave mindset, because they are SERVING just to make ends meet. So they wash out anybody that might wake the slaves up.

Definitely emotionally extortive. Given enough time and resources, one can make any concept or behavior seem to be the right thing.

Because j&b gets you drunk, and the old coot is obviously drunk off his Marble😂 🤔👍

In a nutshell, this Whiskey commercial is two things: 1) an attack on white Males, 2) the face of societal degeneracy.