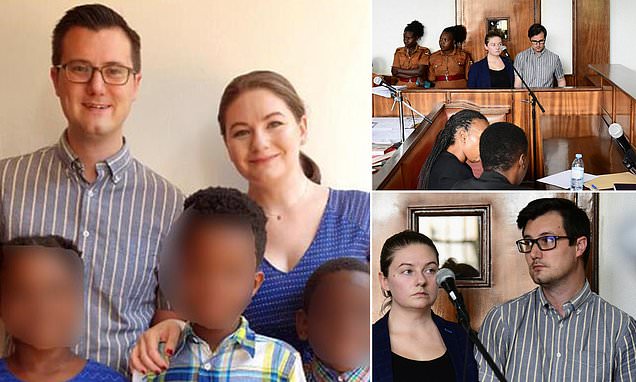 TA US couple is facing the death penalty in Uganda after they were hit with an aggravated child trafficking charge – on top of a child torture charge they are already battling.

Police said that the couple would force the boy to spend the day barefoot and naked, would often make him squat in awkward positions – with his head facing the floor or his hands spread widely – and that he was only served cold meals from a fridge.

The American citizens are being held at Luzira Maximum Security Prison – the country’s only maximum security jail, which houses its death row inmates.

Am I supposed to feel sympathy for these monsters? Imagine how cruel/demonic you have to be to do this! Sounds like Uganda has a better deterrent to child trafficking than the US!

The child torturers/traffickers deserve nothing but death. Uganda is much more civilized than any western country. They are maybe poor but they have morals and decency.

No it’s not, it’s a sh*thole. They don’t like white foreigners messing with their children.

That would definitely show their hypocrisy then. These people had no connections to the government and black market. That’s the simple reason why they were caught and charged. They would never release the estimated amount of African children that are taken by the elite to be abused and cannibalized every year. We all know it’s far greater than the amount of children taken in the US considering southwestern Africa is right next to an underwater fallen angel kingdom and they admitted the beings inhabiting the the place always have been harassing them.

If you read the article, they are being charged with child torture, not sexual abuse.

You need better reading comprehension. They were already fighting the torture charge when they got hit with the trafficking charge. Anybody sick/evil enough to traffic children is definitely getting high on their own supply. The pedo face is just a giveaway.

All pedophiles deserve immediate death. No exceptions. Castration doesn’t work. They can’t be fixed. Their brains are wired differently and can’t be fixed. No therapy will cure them.
There is only one answer to the problem. They just need killed.

If you read the article, they are being charged with child torture, not sexual abuse

Before judging these people, please remember that we should listen to both sides, the accuser and the accused. Being just is different from being biased