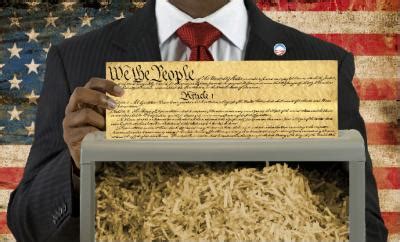 Then again, one could well make the case that the Constitution has already been terminated after years on life support, given the extent to which the safeguards enshrined in the Bill of Rights—adopted 231 years ago as a means of protecting the people against government overreach and abuse—have been steadily chipped away at, undermined, eroded, whittled down, and generally discarded with the support of Congress, the White House, and the courts.

We are in the grip of martial law.

We are in the government’s crosshairs.

We are no longer safe in our homes. This present menace comes from the government’s army of bureaucratized, corporatized, militarized SWAT teams who are waging war on the last stronghold left to us as a free people: the sanctity of our homes.

We have no real freedom of speech.

We have no real privacy. We’re being spied on by a domestic army of government snitches, spies and techno-warriors. This government of Peeping Toms is watching everything we do, reading everything we write, listening to everything we say, and monitoring everything we spend. Beware of what you say, what you read, what you write, where you go, and with whom you communicate, because it is all being recorded, stored, and catalogued, and will be used against you eventually, at a time and place of the government’s choosing.

We are losing our right to bodily privacy and integrity.

We no longer have a right to private property. If government agents can invade your home, break down your doors, kill your dog, damage your furnishings and terrorize your family, your property is no longer private and secure—it belongs to the government. Hard-working Americans are having their bank accounts, homes, cars electronics and cash seized by police under the assumption that they have allegedly been associated with some criminal scheme.

We have no due process. The groundwork has been laid for a new kind of government where it won’t matter if you’re innocent or guilty, whether you’re a threat to the nation, or even if you’re a citizen. What will matter is what the government—or whoever happens to be calling the shots at the time—thinks. And if the powers-that-be think you’re a threat to the nation and should be locked up, then you’ll be locked up with no access to the protections our Constitution provides.

We are no longer presumed innocent. The burden of proof has been reversed. Now we’re presumed guilty unless we can prove our innocence beyond a reasonable doubt in a court of law. Rarely, are we even given the opportunity to do so. The government has embarked on a diabolical campaign to create a nation of suspects predicated on a massive national DNA database. Having already used surveillance technology to render the entire American populace potential suspects, DNA technology in the hands of government coupled with artificial intelligence will complete our transition to a suspect society in which we are all merely waiting to be matched up with a crime.

We have lost the right to be anonymous and move about freely.  At every turn, we’re hemmed in by laws, fines and penalties that regulate and restrict our autonomy, and surveillance cameras that monitor our movements. Likewise, digital currency provides the government and its corporate partners with a mode of commerce that can easily be monitored, tracked, tabulated, mined for data, hacked, hijacked and confiscated when convenient.

We no longer have a government of the people, by the people and for the people. In fact, a study conducted by Princeton and Northwestern University concluded that the U.S. government does not represent the majority of American citizens. Instead, the study found that the government is ruled by the rich and powerful, or the so-called “economic elite.” Moreover, the researchers concluded that policies enacted by this governmental elite nearly always favor special interests and lobbying groups. In other words, we are being ruled by an oligarchy disguised as a democracy, and arguably on our way towards fascism—a form of government where private corporate interests rule, money calls the shots, and the people are seen as mere subjects to be controlled.

We have no guardians of justice. The courts were established to intervene and protect the people against the government and its agents when they overstep their bounds. Yet through their deference to police power, preference for security over freedom, and evisceration of our most basic rights for the sake of order and expediency, the courts have become the guardians of the American police state in which we now live. As a result, sound judgment and justice have largely taken a back seat to legalism, statism and elitism, while preserving the rights of the people has been deprioritized and made to play second fiddle to both governmental and corporate interests.

We have been saddled with a dictator for life. Secret, unchecked presidential powers—acquired through the use of executive orders, decrees, memorandums, proclamations, national security directives and legislative signing statements and which can be activated by any sitting president—now enable past, present and future presidents to operate above the law and beyond the reach of the Constitution.

It’s in our minds….
Another generation or two and it’s full blown 1984 and nobody will remember what a constitution is.

We only use the word constitution when talking about The Constitution!

I have a new constitution! To use the word more often. Keep it alive!

People have been told this over and over for DECADES and they refused to listen, so here we are fully in the nwo and things will get much much worse. G Edward griffin has been pleading with people since the 60’s to wake up to collectivism taking over the country, and almost no one cared or listened.

It’s been decimated legally ever since the US became a corporation and we went from Americans to US Citizens. They have maintained the illusion so we boiled slowly.

The 14th amendment, was the first order of the N3w W0rld 0rder after the corporate military take over following the first 13.

The US has always been called the new world, it was from start, a lab version of the NWO, after european colonialism went over the whole world destroying cultures, modes of life, civilizations, enslaving people, the USA was then built over the biggest genocide in human history with more than 120 million natives. Now we are living the same shift process Europe went through, from Eu to the USA, and now from USA to CHINA.
When you say it was a take over, it’s like saying at the beginning the gòod people were in charge, that’s not true, it was always run by those you know well

I don’t think the US was ever a democracy/republic. There has always been a shadow government. They have come so far that they just can’t hide any longer and are operating openly. Soon the nukes are coming.

Don't Tread on Me

We still have our 2nd amendment. That’s the reason why we’re not having such insanely draconian practices put on us like in other countries. As long as we’re armed, the Constitution stands. The power to use deadly force against rogue government is the ultimate equalizer.

Remember biggest mass murderer Mao Zedong once said “Political power comes out of the barrel of a gun.” We still have the ultimate power when we’ve had enough. That’s why so many draconian gun control laws are attempted to be pushed on us.