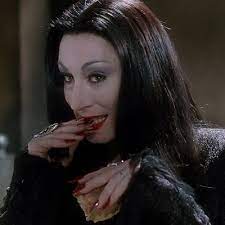 Their name is Anjelica Huston. After watching hours of MrE, I now have t****y vision and noticed it instantly when I saw part of the 1991 movie a week ago. Seeing that new Netflix Wednesday show posted here reminded me to look up this person. Yeah, definitely a dude. And something told me I should type their name alongside Marina Abramovic’s and low and behold they are in this book photo collection by Hugo Huerta Marin, an art assistant of hers. 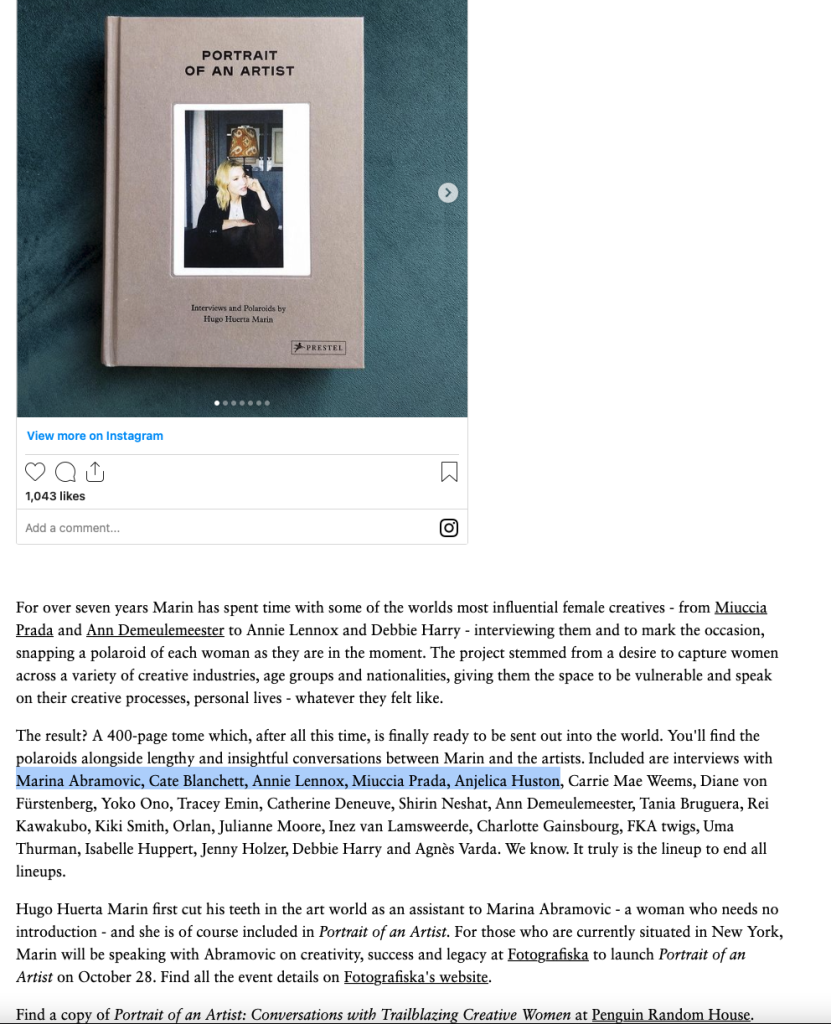 All of these people are suspect of some sort of shennanigans:

Here are some more pictures for reference of Anjelica. 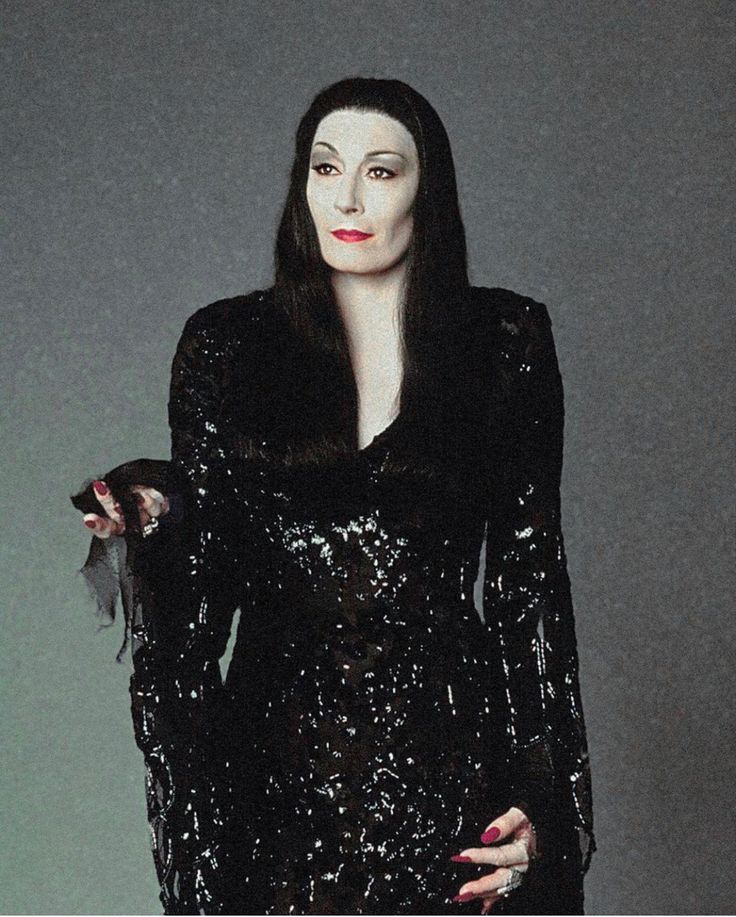 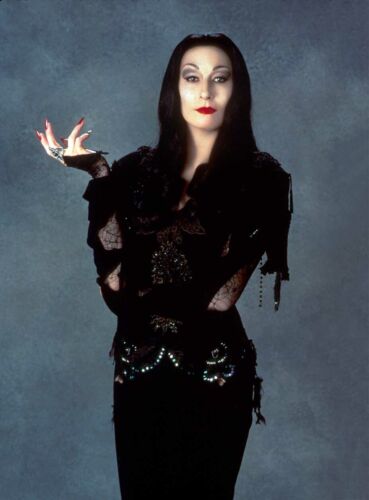 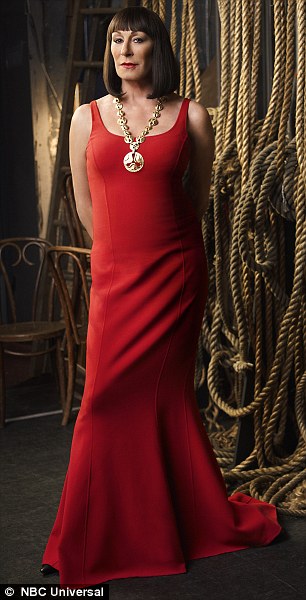 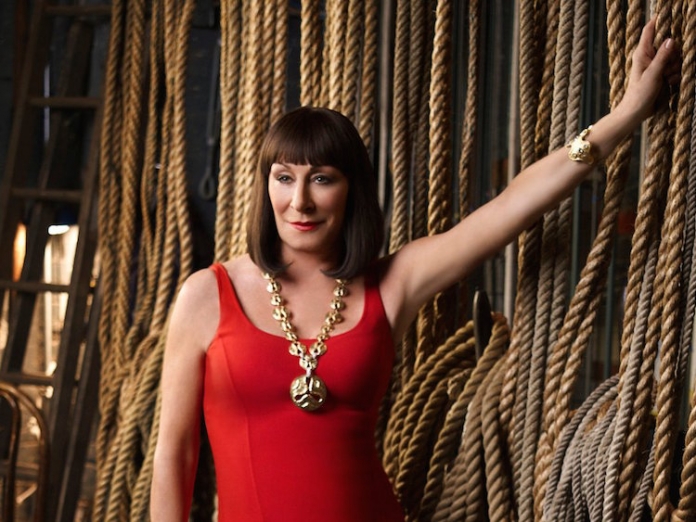 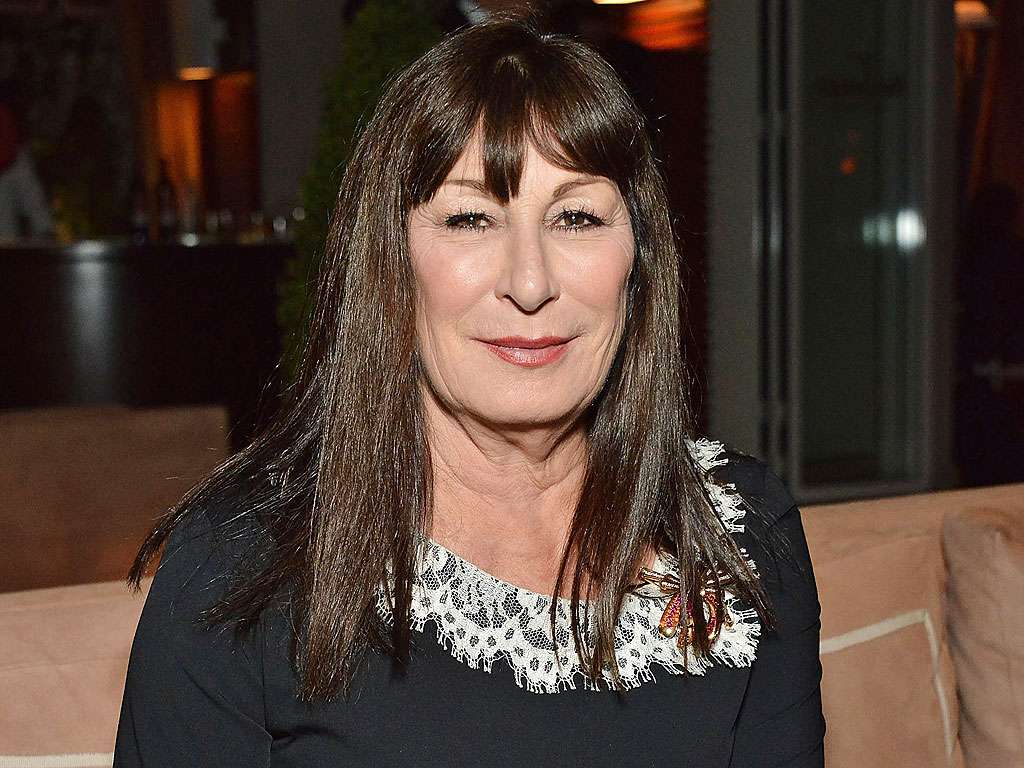 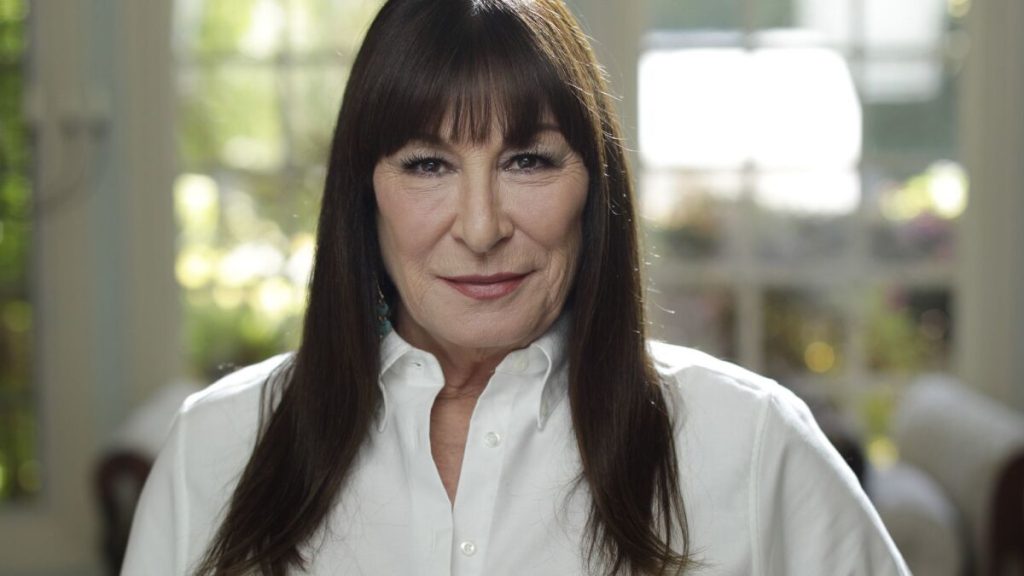 Interestingly, IMDB says they were in mockumentary Spinal Tap as “Polly Deutsch”, 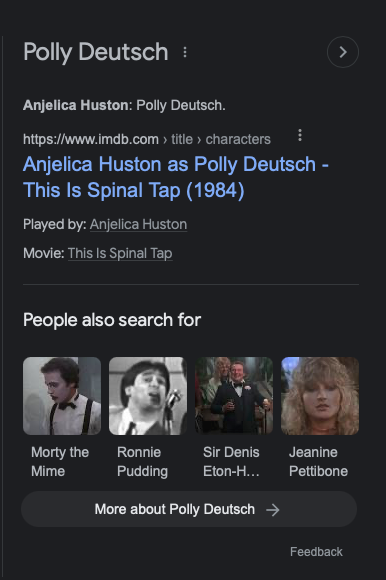 but when Googled it brings up this other person who looks like a t****y and is born the same year, 1951. Jeanine Pettibone played by June Chadwick. An alias? 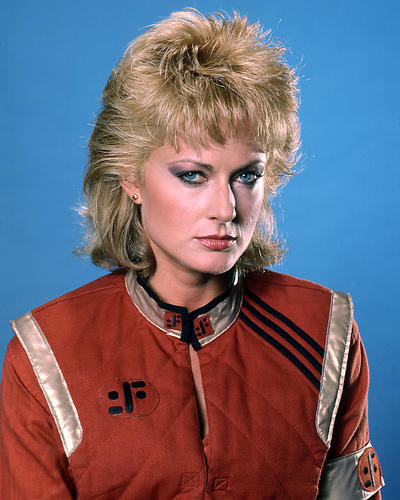 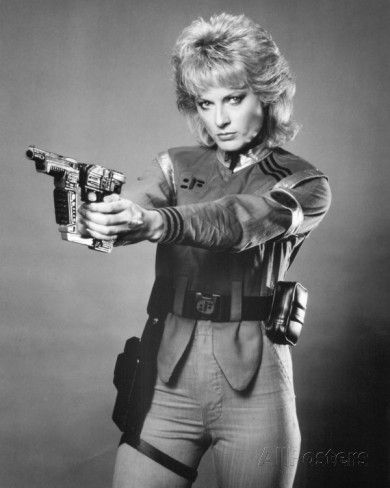 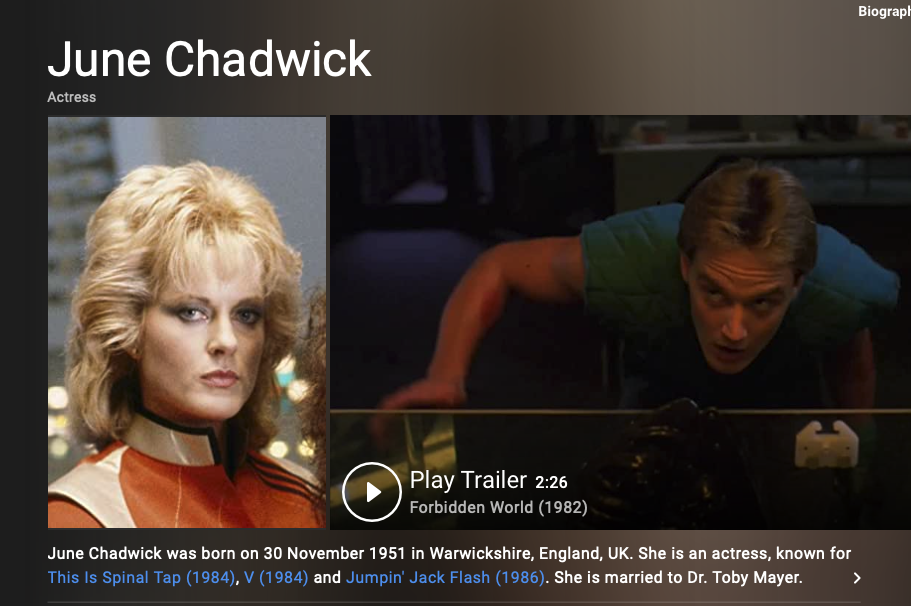 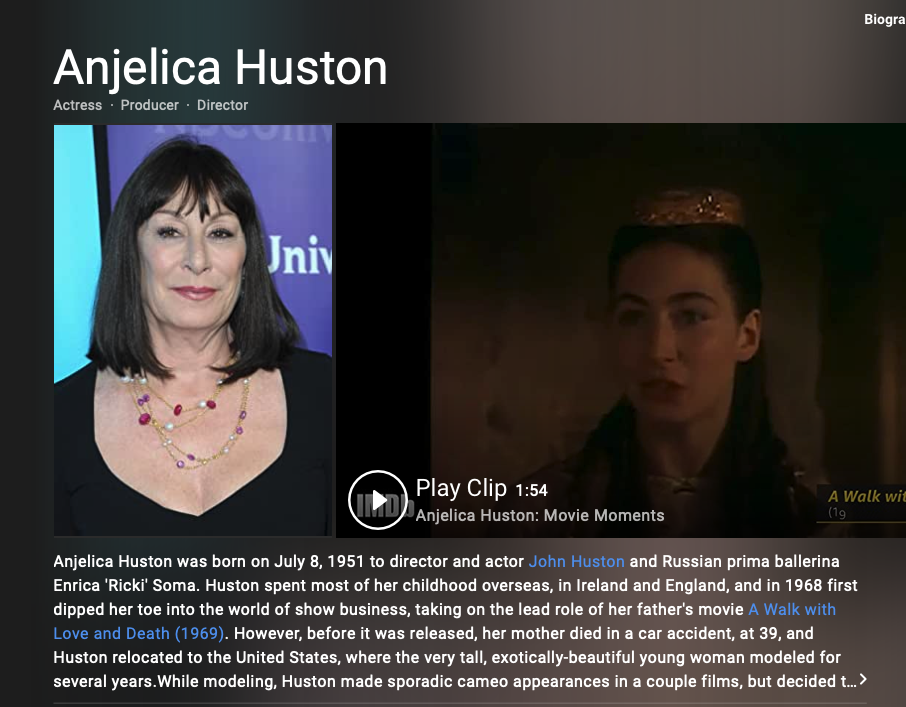 Looks like this Jim Henson movie The Witches is worth investigating in classic Vigilant Citizen style. Released the year before Addam’s Family. Never seen it myself, but I have become suspicious of Henson and was unaware of this creepy film. 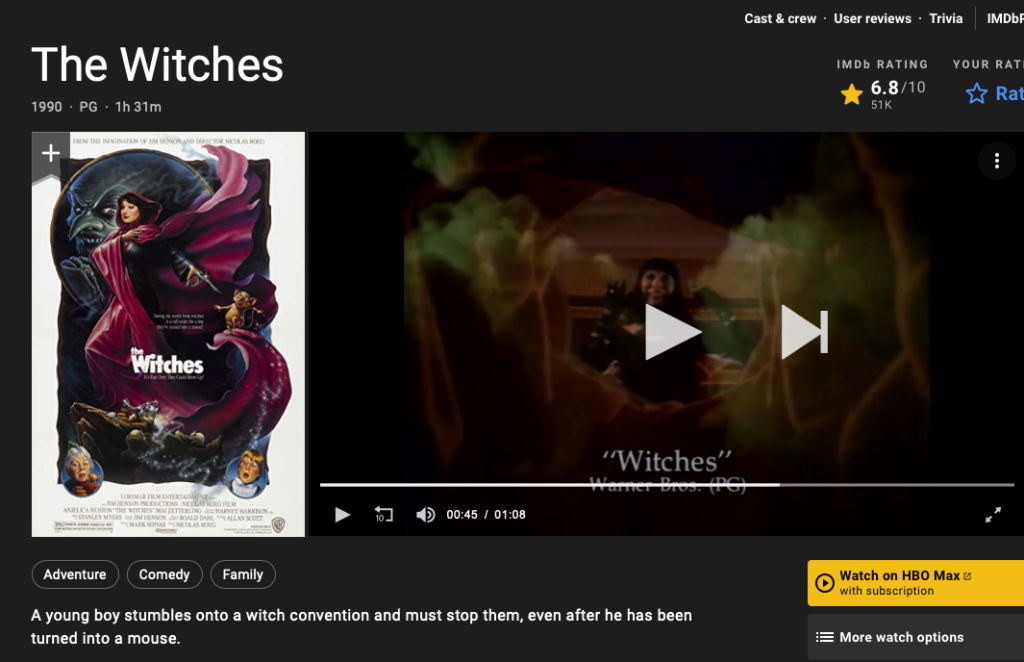 Wow, this is mind blowing to be honest, thanks for your article. You know i always had a strange feeling while watching the Addams Family show that there is something weird about Morticia, althought “she” was kind of attractive i never felt that natural spark inside me like when i see the real hot woman. We can only wonder how many more our beloved movie characters from our childhood are male to female trans’.

her dad was a Hollywood elite from way back, so I’m not surprised.

They have been doing the gender inversion stuff for a while now. Once you start to notice it, you realize all these “hot” starlets were actually born men…check out Amy says WTF on bitchute if you want to dig deeperor just want additional confirmation. This topic isn’t an easy one to find online. She did a mind blowing and very well researched podcast on the elite gender inversion. She also has a free online book with some telling info on SRA and MK ultra mind control.

I took your advice and looked into Amy days wtf. She’s awesome and brilliant! So much in depth research but she makes it easy to understand. She must be related to VC 😉

IMDB trivia page for the witches film:
“Many of the witches in the meeting are men in women’s clothing.”

Well, there ya go.

I watched a clip of the movie last night. The event the witches are going to is called,

“The Royal Society For the Prevention of Cruelty To Children”

Like I’ve been telling everyone who will listen, many organizations do the opposite of their name.

ANTIFA is not anti-fascist. They ARE fascist.

Organizations with “peace and love” in their name are probably about “hate and cruelty”.

Other things I noticed since posting…

There is a second “The Witches” movie made recently. Should also watch that.

Anjelica’s brother Danny Huston was in two different seasons of American Horror Story, a show full of ritual dark magic and featured on VC all the time AND that weird clip where the witch played by Frances Conroy yells “balenciaga” while burning at the stake.

Now that I pull up that show with new eyes, Frances and Jessica Lange are both possible hidden gender benders too.

In the Spinal Tap, the hand going through stone henge is clearly a phallic representation lined up with Angelica’s body in that promotional pic. A sacred monument associated with fertility and magic rituals.

Anjelica is on the TV show Transparent. A drama about being trans.

Jessica Lange was in Tootsie which was a gender bender type movie with Dustin Hoffman.

Jessiicaa Lange is woman. Watch hher in kingkong. When she was young she was really beautiful

why all the interest in Addams family recently – seems like ancient history. Is there a reboot coming out or am I missing something?

They released a one off series on Wednesday Addams on Netflix.

I’ve noticed that every time they do a remake or make a sequel it’s because they want to do a better “job”. They need to upgrade it. More trannies, more not that hard to spot satanic symbols

He looks like a crocodile with a wig. Anjie is nothing but an ugly dude

June and Angelica are clearly different people, and not every unattractive woman is a secret trans

Not every person with breasts, long hair, and makeup, is a woman.

You underestimate the extent of this bamboozle in Hollywood and government.

Go look at pictures of Barbara Bush, for example. A much more obvious man than Michelle Obama. Every first lady is suspect. No joke.

Well then every padre/reverend etc are by default pedo suspects.

Houston is definitely a man, can’t unsee it now. The full length photo cinches it.

Wait…did Jack Nicholson beat that up for numerous years?

Utter nonsense. Angelica Houston was always ‘big boned’ and this is frankly offensive. There are plenty of photos from her youth where is is clearly a young woman. Not all women are built like “dolly birds.”

Women get old and some age better than others.

Yeah, I was just thinking the same. She IS into some dark stuff, and def not the “delicate” type, but…

I have an aunt who I’ve known all my life and really adore. She’s fun and funny and a great member of her community. She also, well, looks like a guy. She’s NOT a guy, and she doesn’t want to be one. She’s never taken any kind of drugs or had any surgery. I’ve always just assumed she was born with an unusually high amount of testosterone. She’s slim-hipped, flat-chested, tall, even has a kinda deep, scratchy voice. (And yes, she is attracted to women. She’s been in a loving monogamous marriage with another woman for 20+ years.) If I posted a pic of her here, everyone would swear she was born a man, but nope.

That isn’t to say it doesn’t happen, especially in Hollywood where ppl lean toward the dramatic. It just isn’t always a foregone conclusion.

“photos from her youth where she is clearly a young woman”

I disagree. Younger people are more androgynous and can pass either way with costume and behaviour modification. I am straight, but I can also appreciate a young male or female that looks “cute”. Guys can be pretty too. Men range in archetypal looks from Jacob to Esau. Effeminate momma’s boy to rugged bigfoot lookin’ mountain man.

Why do people like Tina Louise (Ginger from Gilligan’s Island) and many other actors look so hideous in old age? Because the masculine gender manifests itself in the skull in obvious ways. Plastic surgery makes them look like gargoyles in the uncanny valley because they can’t hide the truth. That and they’ve probably lost adrenochrome privileges much like “Mudd’s Women” in S1 E6 of Star Trek.

The thing is, the people who do this worship the androgyne, like the Baphomet. I really couldn’t care less if a man wants to pretend to be a woman of their own will. What’s offensive is the extent we’ve been lied to and that many children were groomed into these high profile positions MK Ultra style. Probably castrated and worse. You’ll notice abnormally long arms in many of them. Everything you think you know is wrong.

Theater and men pretending to be women have gone hand in hand since the beginning. It’s a magic trick.

You may scoff, but Marilyn Monroe and many other Beta Sex Kittens are probably gender bending. In “Some Like It Hot”, it’s a perfect example of hidden in plain sight, and the cheerleader effect. Put a well done gender bender in the middle of a bunch of obvious men in drag is a very powerful disguise.

Like LAW and legalese, this is all very sophisticated dark magic going back to the Phoenicians and Babylon. The occult. Hidden. Hiding their gender. Go spend an entire weekend watching MrE’s content THEN tell me it is utter nonsense. I say you just haven’t done your homework yet.

Aging uglifiies everybody. Don’t judge a book by Its cover. Bias Isn’t fact

This is utter nonsense.

Nah, not all women born female are tiny and delicate. If you look at pics of Angelica without all the heavy makeup (which has come to be associated with drag) and before she got older and gained weight, she’s clearly a woman. This kind of thing makes us look silly imo, sorry.

Now Angelica DOES have some shady connections. If you want a true scoop involving her and former husband Jack Nicholson, look up their connections to Roman Polanski. He was at their home when he raped a 13 yr old girl. It wasn’t their fault but it does seem like they were being willfully ignorant of what was going on.

Annie Lennox trained her daughter to be a witch and she had to kill her new husband to enter the cult, they reported she didn’t show up to the funeral, chief of police name was waters, she killed him in the water, ruled an accident, her career started to have an uptick and she was in a Garrett Børns fender guitar music video thing where they joked about killing people in the water and getting wish’s fulfilled very shortly after this incident is how I found that rabbit hole, no one else stumbled on

Many women in the past before surgery was common (no anaesthesia Yet) did look masculine or have Very strong features just look at old pics on the net before ww I. Do we have to judge women because they aren’t dainty, not pretty enough etc. In Europe, very strong featured women and even men exist. They have faces that only their mothers would love. Yet we shouldn’t judge by looks or beauty

I did not understand this… Besides… Wtf matters if she was a man? Lol

That is one ugly woman, but a woman nonetheless. Please don’t look up Grace Jones. You may discover that humanity isn’t black and white. This is foolish.

Grace Jones is an obvious man.

Except she’s a woman.

Look at a young Anjelica Huston. This isn’t a man. What would be the purpose of the conspiracy? Why infiltrate popular media with secret transgender people? This is one of the dumbest conspiracies ever. 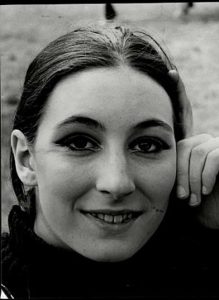