After a shooting by a disturbed 69-year-old man who killed three Kurdish immigrants, the Kurdish community of France had decided to demonstrate to pay tribute to the victims and to denounce the insecurity which is getting worse and worse at the moment for everyone in France. .

But these demonstrations quickly slipped from the words of the French Prime Minister on this shooting which according to them spoke for nothing to say (as usual), violence stoked by the arrival of the police.

The very evening when millions of French people gather to celebrate Christmas Eve, the streets of Paris are filled with overturned and burned cars, cobblestones thrown at the police, degraded and tagged streets, even during the previous attacks never such a revolt had taken place, unfortunately the Kurds will give themselves a bad image for the general public.

Do not fall into their trap, no matter what we believe or where we come from they want to divide us to better reign!

This is incredibly sad. Commoners fighting badged commoners who fight in defense of the Lairds wishing to crush them both.

Paris foundations are build on millions of skeletons stockpiled in underground galleries called “Catacombes de Paris”, it’s the biggest and creepiest graveyard in the world.
I don’t know if you went to this satanic city before, i was there and i felt deep rooted evil out there, and i think this feeling is the true “Paris syndrom” feeling, it’s not disapointment, it’s darkness 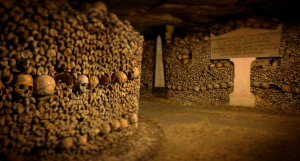 A E
Reply to  nicorico

Horrible. I cannot imagine. I don’t think I could step foot there, truly. I seem to sense far more than I can explain.

France has collapsed since the French Revolution, instigated by Freemasons and philosophers hating Christianity and therefore establishing secularism as the most important point of the nation (a simple glance at the Declaration of Man and citoten is enough to see the satanic side)+ 1200 dead guillotined in Paris following the revolution

This is very true and is the intention. It will be difficult to get folk to understand this.