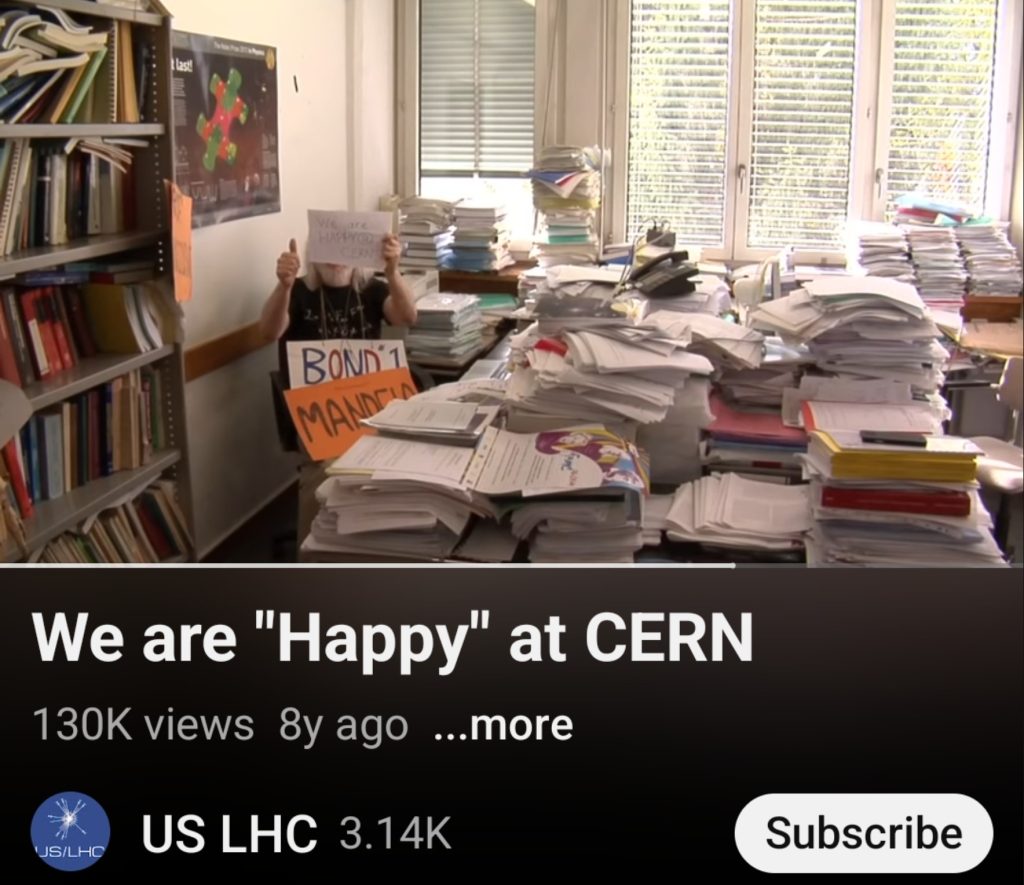 The CERN Hadron collider is the largest particle collider in the world. Because of this device, CERN scientists have been making some insane scientific discoveries because of it. Many believe since the beginning of CERN, many odd things have been occurring, specifically the Mandela Effect.

This image from a video created by scientists at CERN. The signs around his neck say “Bond 1” and “Mandela”. The first actor to play James Bond was Barry Nelson. Nelson Mandela. Mandela Effect.

He was the first to play Bond
https://en.m.wikipedia.org/wiki/Portrayal_of_James_Bond_in_film

The Mandela effect is collective misremembering, not a time warp

A E
Reply to  mellowyellow

The argument is, what causes this collective misremembering, and the answer perhaps is a time warp.

I had no experience with any of the typical Mandela Effect items, until I noticed the Ford logo. It DID NOT have the curlicue pigtail when I was little, and there is real world evidence of that, old promo items, etc. And that jumped out at me because of the Fnord thing in The Illuminatus Trilogy. I don’t know what is going on, or why some seemingly inconsequential like the Ford logo would change, or why someone would gaslight us about it.

I had a huge Mandela effect with, weirdly, the movie It. The old one, obvs. I could have sworn up and down that there was a certain scene in there that I can remember plain as day. Now the scene has completely disappeared and I cannot find it or find anyone that remembers it. Maybe it really is just a trick of the mind, but I can tell you that it bothers me. I’ve seen all the other mandela’s that people talk about, the common ones, like Luke I am your father, and the Berenstein bears versus Berenstain bears, but I can tell you that the only one that really knaws at me is that stupid one from that movie. LoL. I don’t know what it is but there is something real about the Mandela effect.

It was definitely Berenstein Bears, I had every book of theirs I could get my hands on when I was very young and I have an excellent memory for spelling.

Author
deletetheelite
Reply to  A E

That one gets me everytime as well haha

It actually ticks me off they’d try to pass this off on us. You and I both know for a plain FACT had it been BerenSTAIN millions of kids like you and I would have fixated on that “stain” bit and there would be a load of dumb jokes to prove it. I even had their weeble-wobble treehouse, so trust me, I was a huge fan. My parents didn’t buy us many toys and we didn’t get hardly any gifts from friends or extended family, so that was my one big Christmas toy one year and one of the only toys I’d have gotten. I played with it all the time.

Yeah you’re right. Parents right now would be telling their kids about the dumb stain jokes they had about the Berenstain Bears when they were kids.

YES! I know! The other spelling doesn’t look right at all. It’s just a weird spelling.

What weirds me out are the quotes around the word happy.

A E
Reply to  Hope

It refers to Apis or Hapis sacred bull of Osiris. This is the real meaning of “Happytalism”.