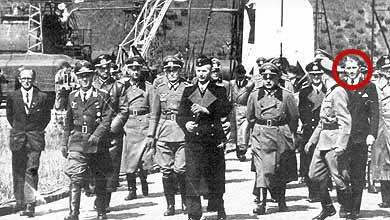 Rocket scientist Wernher von Braun (1912-77)–who helped develop the U.S. missile arsenal during the Cold War, built rockets for NASA, helped put astronauts on the moon and designed Disney’s Tomorrowland, was an elite N**i SS Officer that used stolen German Jewish scientists schema to design V-2 Rockets, which were then launched into cities in order terrorize and murder innocent civilians for Hitler in WWII. The laborers building these rockets were enslaved Jews.  As always the dragons steal from and enslave The Judai (yes, that is where the name Jedi comes from in Star Wars, it is the Latin word for Jews) for their destruction of mankind and to advance their satanic ways.

If you thought putting a man on the moon (which didn’t happen until Alan Shepard landed in 1971, the real first lunar walker) was heroic, remember that a Satanic N**i, captured in Operation Paperclip was head of the NASA Apollo program, using murdered German Jewish Physicists and a Engineers technology.

We still know about the sabbatean frankists deceivers.

The holocaust is getting renewed attention these days because during the period proceeding the genocide, 1933-1938, there was significant parallels with the events And propaganda of today (2020 on) being carried out by The New World Order on a global scale. This includes all of the people slaughtered under the N**i regime, regardless of race. The technology of the V-2 and then Saturn V rockets was however, invented by Jews.

Stalin’s genocide and accompanying propaganda were just as vile, but not nearly as well executed from a propaganda perspective. That is, while most Germans by and large were swept up by N**i Nationalist fervor, by the time Stalin came to power, most Russians knew communism was a charade for dictatorial control and perpetual genocide. Winston Churchill even exclaimed “We got the wrong Pig!” Referring to the allies destruction of a Hitler rather than Stalin.

The genocide of innocent the Chinese, committed by the Japanese in WWII, by some estimates as high as 30 million, was equally as cruel, and does not receive the historical discussion they deserve either.

However, what makes the Holocaust particularly “special,” is that most of the advancements of modern technology that shaped the 20th century onward, from The Atomic Bomb/Nuclear Energy, Telecommunications, Aviation and Jet Propulsion, Rocketry, Food Production, Chemical Engineering, etc. we’re the products of Jewish innovation, for which those people were stolen from, and then slaughtered and demonized. This is not the case with the other victims of the holocaust, but does not in any way invalidate their suffering. Von Braun deserves to be exposed for all of the atrocities he committed, and to serve as an example of how the oligarchy only cares about power, and not justice.

The food you eat is only able to be grown because the soil is fertilized by a process of Nitrogen distillation from the air invented by Fritz Haber, a Jew.

The satelites you use to run your phone and all of its apps, including GPS, communications, and the wireless internet you are using to make these hateful comments are only possible because of the scientific advancements of two Jews, Albert Einstein and Heinrich Hertz.

None of this is meant as a supremacy argument; there are brilliant geniuses of all faiths religions and genetic histories: we are all God’s children. However, in a time when once again the technology of the Jews is being used to enslave mankind, perpetrate genocide, and advance Satanic ideals, it is pertinent to remind the world of the horrors committed in Germany from 1933-1945, that are still living memory for many, which looked extremely similar to what is occurring now on a global scale.

Von Braun’s bust still hangs in NASA, the atrocities of the genocide he committed overlooked and whitewashed from history because he had fully understood the advancements of those he slaughtered. It is shameful

What horrors? Oh, yeah, those 6 millions lie when in the whole Europe there were barely 3 million Jews? Stop trying to whitewash them, the truth is already out!

I understand where your coming from. But we are reminded so much about WW2 and the Holocaust. That’s why people find it annoying now because they think why is this getting so much attention to this day while others have suffered similar fates. What about the others who died in those camps? How is Hitler worst but Stalin killed more of them then Hitler? I don’t hate these people and I love my friends but when anymore does something questionable I will not hesitate to try to call it out.

The op days this guy was a satanist,where did that come from??? Also proof read your stuff before posting.otherwise you could look too dumb to be taken seriously.

“ The best legal minds, doctors and scientists volunteered for the SS and became officers. The inner circle of SS head Heinrich Himmler included jurists and doctors who led the campaigns of destruction or were commanders of concentration and death camps.
Between 1936 and 1941, some of these people met in Wewelsburg Castle in northwestern Germany once a year, under Himmler’s command, to take part in satanic rituals and read cultish texts of Germanic tribes. With Himmler as King Arthur and 12 SS officers as the 12 knights, these N**i leaders gathered annually in knights’ gear at a round table and tried to channel the pagan heroes of German legend.”

Von Braun was among those gathered for the satanic rituals.

Yeah, noticed that, but like I said the truth will always out. Hypocrisy galore, the site never says the truth that Jews are our enemies, FACT!

I had no idea there were so many white supremacist trolls running around in a place about calling out evil.

I’m pretty sure some of them are paid trolls. They have been popping up everywhere on sites like this lately.. Especially on Bitchute and Odysee..

Nice to see you are keeping it current with your “news”.

Spouting off support support for the Nazis and casual death threats doesn’t breed confidence about one’s intentions. Never met a white supremacist that wasn’t violent and full of hate.

So how do all the satellites stay up, if not in circular orbit? Glue?

I don’t mean to always be arguing with you, 444Gem, but the Jedi knights are named after the Djed pillar of Egyptian art. It represents the backbone of the god Osiris, and hence kundalini, the “Force.” There is no dark and light side of that force, it is all bad, one of the names by which occultists refer to Satan. David Bowie, when asked in a tv interview from the 1970s’ if he believed in God, answered that he believed in a “force.” Star Wars is filled with occult imagery: the brother and sister with a quasi incestuous relationship, the dark father, the double sun imagery of the dying and resurrecting god. All mythic symbolism with Satanic meaning.

You are 100% correct about all of this (and clearly know your Mysteries). You are also correct about the Djed pillar being Osiris metaphorical backbone.

However, never do these allegories have just one meaning. There are many many levels, layered one on top of the other, which is why Star Wars resonantes so strongly with so many people’s subconscious. Your interpretations of The Osiris/Isis incest (in the womb to make Horus, the sun that is risen) As Luke/Leía, and the double sun are spot on. References to occult beliefs in the “force” as well. They are the manner of superimposing the Esoteric mysteries’ spiritual (and satanic) interpretations on top of the more objective history told.

It correct that the word “Jews” in Latin is Judai, said the same as the name Jedi. Any dictionary will show you this, or even online translator with Latin; many Star Wars official stories even say the Jedi/Judai come from an ancient group called the Jud’aii. The pillar of Djed, was also an instrument used for electromagnetic transmission. One thing to keep in mind is that Osiris/Isis is seen as allegory. Osiris backbone was indeed a tower for retransmitting EM fields across the Giza planes at longer distances.

Star Wars is the story of The Jews discovering they could harness lightning 5000 years ago, the same as humans had Prometheus to steal fire, for the use of electrical current. There was eventually a split between Jews and their associates between those that: A) believed EM energy should be harnessed and freely shared (as a gift from god) to enlighten and lift up humanity and B) those that wanted to hoard it in order to become “like gods” and to harness it to wield power over the others.

This is why the emperor has Lightning out of his hands (Tesla coils), Jedi use light sabers with allegorical quart crystals (lasers), and they can attract meta objects (magnetics).

Maybe we should write a joint article on Star Wars?