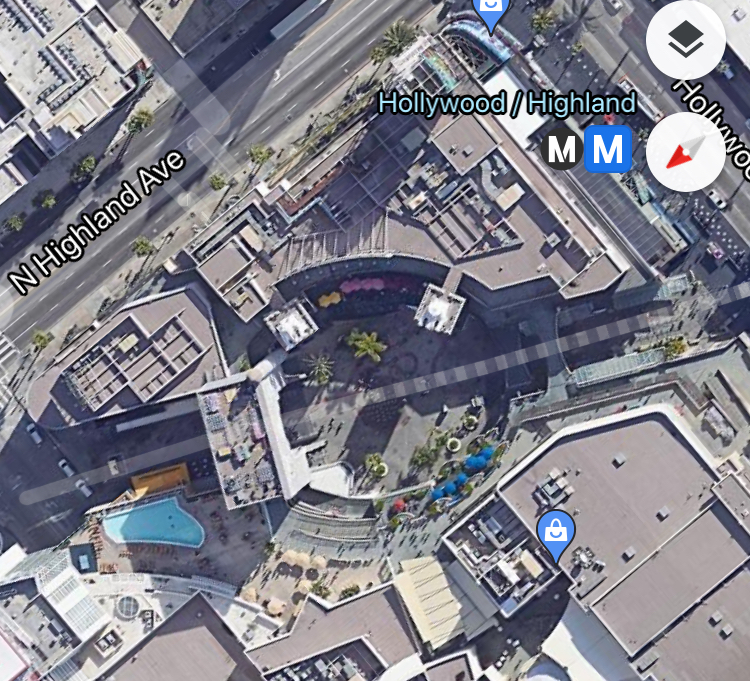 Originally called just the Hollywood/Highland mall, it  was built in the 1920s at the very center of Hollywood in the shape of the Illuminati eye from an arial view. 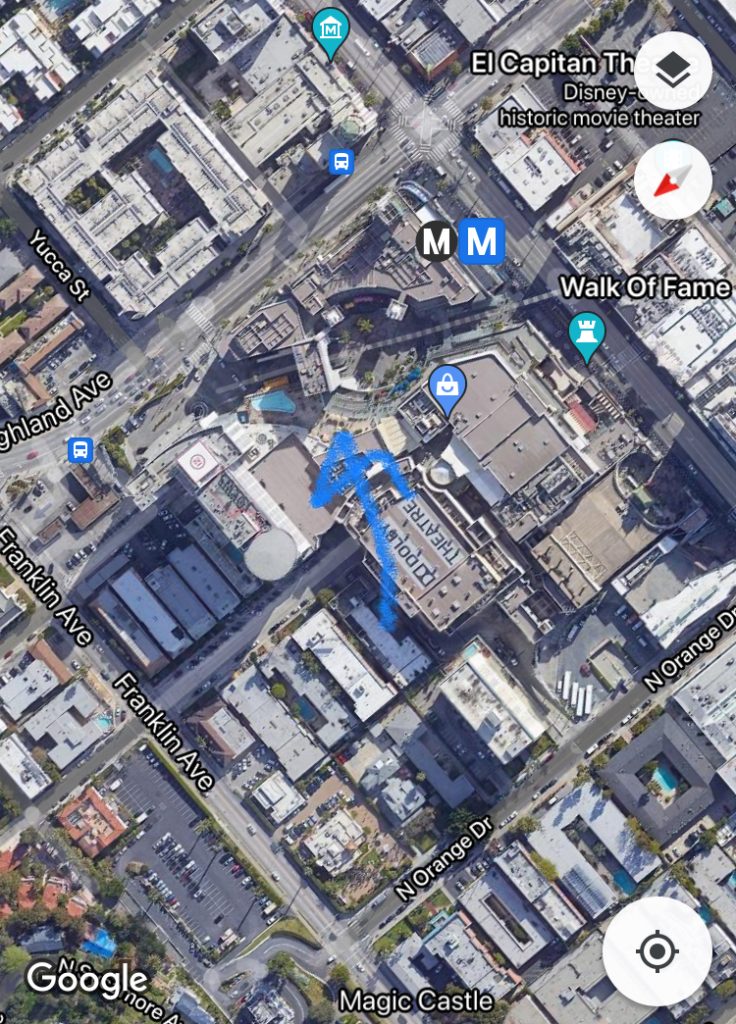 A little farther just in case you can’t see it.

this mall originally featured heavy Masonic imagery from its construction until now, when it was sold by American based CiM to a Chinese real estate fund in February 2020. Its Masonic imagery has been removed and facades covered since March 2020.

This is what it used to look like when it was just called Hollywood/Highland Mall:

your standard Masonic fare. They have now changed the name to OVATIΘΝ since the sale to the Chinese and here are the images of what it will look like when construction is complete: 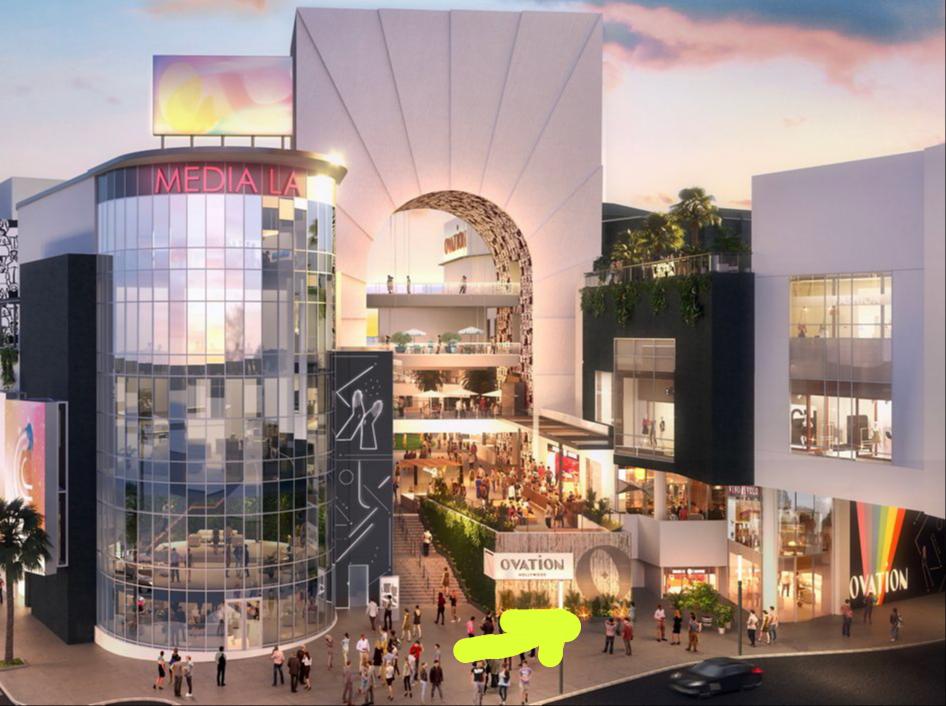 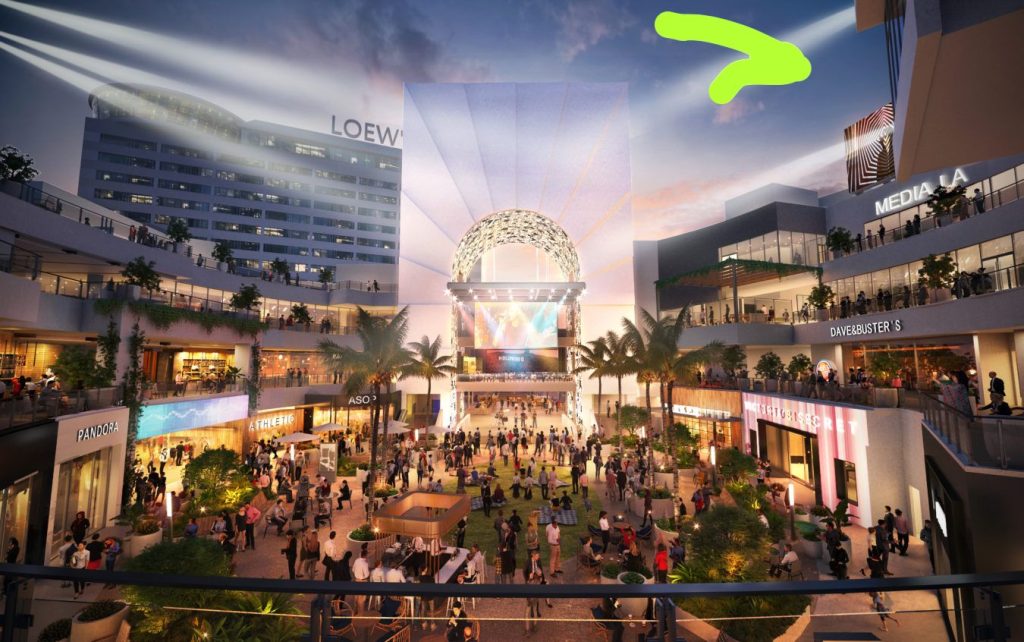 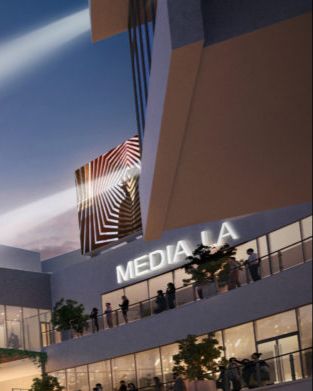 So ya, nice little Easter eggs of mind control symbolism in the mall at the center of Hollywood… but where it starts getting dark is when you dissect the name OVATIΘΝ. There are three layers:

1. Applause or adulation from a crowd (English)

2. A Roman triumph given to a general when he defeated slaves or other inferior enemies without shedding blood or declaring war (Latin). Here’s the Wikipedia 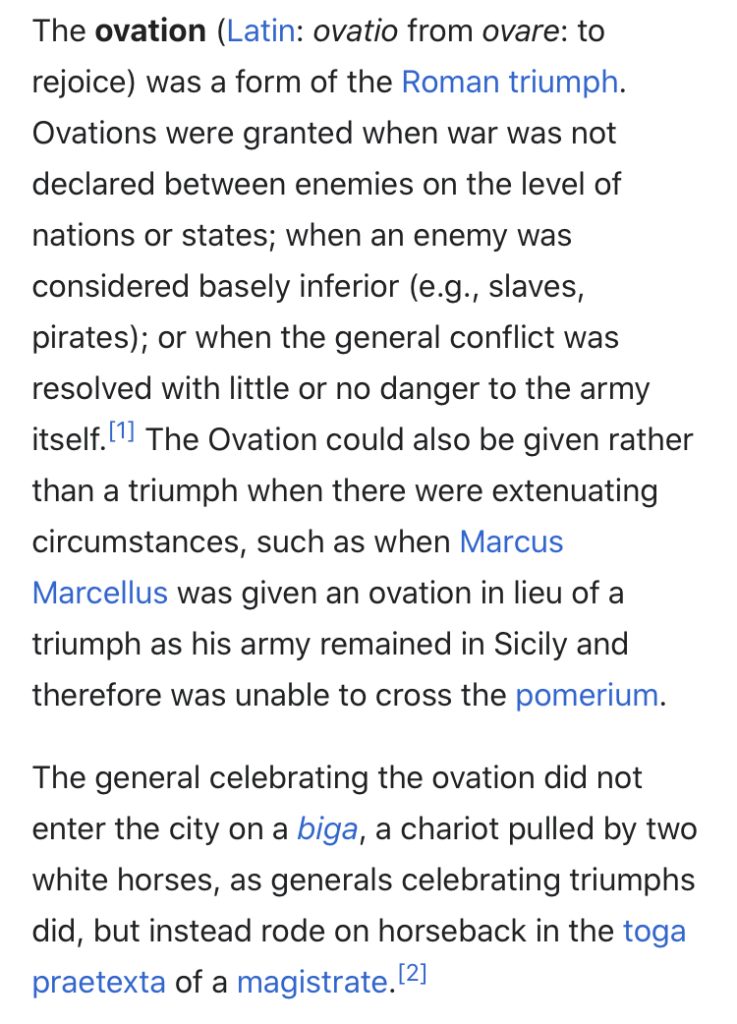 So ok. But the real kicker comes when you dissect the origins (the widely accepted scholarly ones) of the letters in OVATIΘΝ from Egyptian/Pheonician/Hebrew and Classical Greek.
Omicron = Ayin= “Eye”
Waw= “hook/peg”
Aleph = “beast of burden” or “Cattle”
Taw = “mark of the illiterate”
Iota = “Arm/Hand”
Θ Theta = Death/Rebirth
Nun = Snake (Egyptian)/ Fish (Hebrew) aka the snake (the devil) as the fish (Jesus)

Put those together and the message is awfully clear:

Obviously not a coincidence… in fact the term taw “mark of cattle” is synonymous with the Greek chamagra “branded mark of cattle” used when discussing the mark of the beast in Revelations. If you want to verify the letters original meanings please do. I am an antiquities scholar from the tribe of Judah and the House of David.

Now if you know anything about Gematria, using letters for cypher we numbers, it had been a  common practice in the levant, particularly among Jews for thousands of years. The gematria tells you everything you need to know regarding dates with I the word OVATIΘΝ 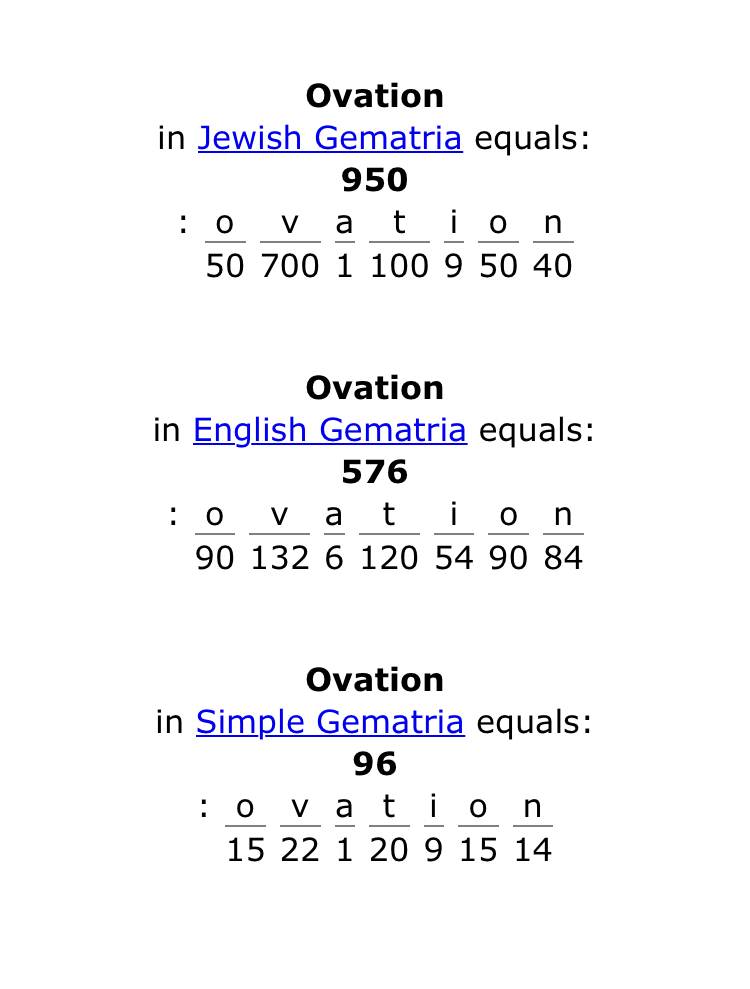 Starting with the hebrew Gematria of 950, that is the date that Solomon’s temple was built according to Freemasons (950 BCE) 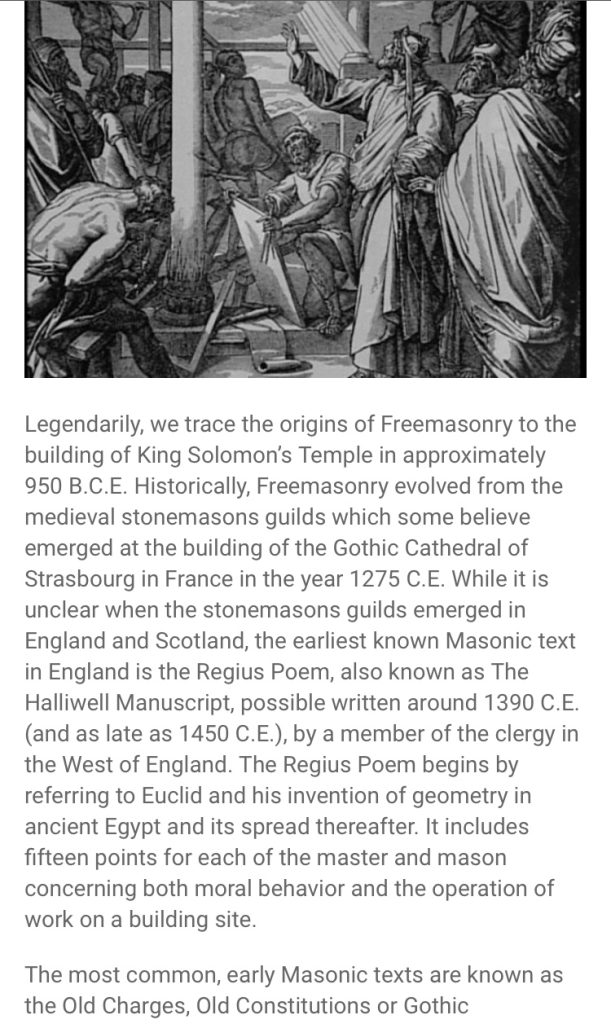 Onto the English Gematria of OVATIΘΝ of 576. In fact Masonic lodge 576 is the chapter founded by infamous occultist and satanist, revered in Hollywood, Allister Crowley. The date of founding was July 29, 1923 after Crowley broke off from the main centralized Masonic rites. There having a celebration for 100 years on July 29, 2023. 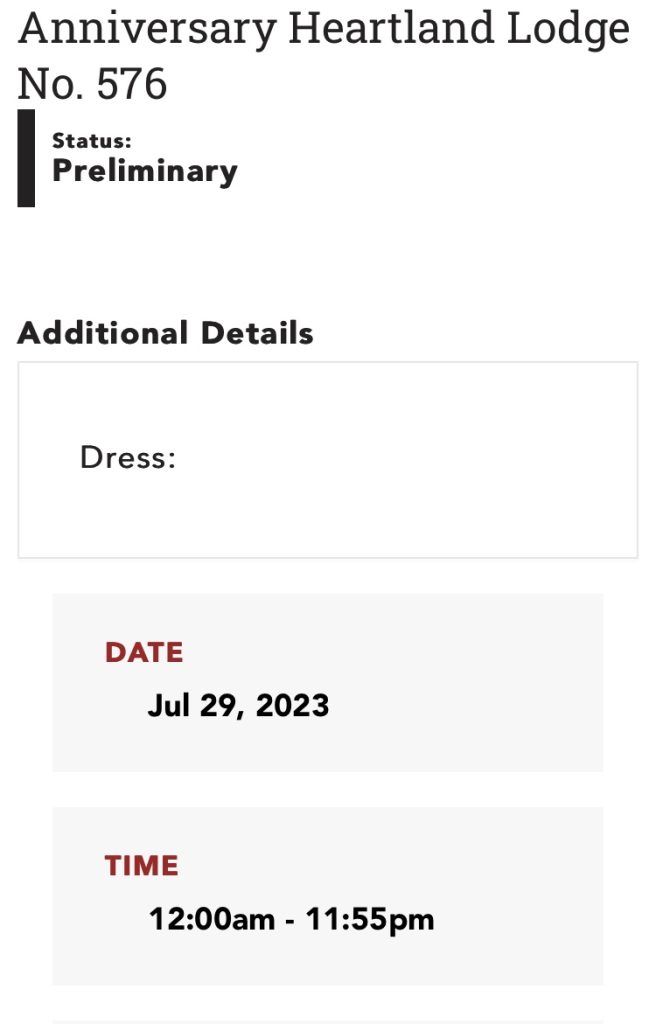 July 29, 2023 is exactly 3.3333 years after March 20, 2020 (3/20/2020). That was the WHOs world “Happytalism day” celebrating the start of the whole world closing and the great reset.  In revelations they prescribe that the leviathan will rule for 42 lunar months of the Jewish calendar. For simplicity sake that is about 29 days per month, or 1216.6666 days. In the Julian calendar’s solar months of 30 that averages to 40 months, which equate perfectly with the date of the 100th anniversary of Crowley’s initiation.

This thread goes deeper but Ill save that for later.

The 6.6666 years lands in November 26, 2026, which appears to be the date they preview as the peak time for antichrist. I may be wrong about what they’re going to do, I’m still unfolding symbolic changes they’ve made that show their plans for the next decade.

Mind-blowing and I can’t wait to read more.
Perhaps on another note, interesting the mall was bought by a Chinese real estate firm. My first thought after your in depth explanation of the Roman meaning of ovation was that the Chinese are triumphing over their continual takeover of America with little to no resistance and they know it.

It is not the Chinese buying America, it is the transnational global elite. China is a perfect cover country for any nefarious activity by the world oligarchy because the government has no accountability to citizenry or world organizations oversight. Furthermore the government, while autocratic, is very vulnerable because it survives on a precarious balance of needing 10% growth in GDP year over year to meet financial obligations for servicing debt to world banks. They also own nearly 1/3 of US debt.

Consider that the Wuhan lab in China was funded by the US based NIH, that the head of the International Monetary Fund is Chinese and that the largest owner of US Dollar denominated debt is the Chinese government.

The idea of the US versus China is propaganda spread by the global elite (That control both governments like puppets via financial levers) to keep the general public of the west from realizing that indeed they are being enslaved like cattle by a New World Order that usurps border based national governments. It’s good old fashioned misdirection mixed with divide and conquer.

This is insane, a truly eye-opening piece 👍🏻

“96 years after Allister Crowley broke away from the Rite of Memphis-Misraim (1923-2019) and established the New World Order we build Solomon’s Temple to applaud/celebrate the triumph over the slaves without a declaration of war by having the EYE hook/peg the beasts of burden (cattle) with the mark of the illiterate and thus the resurrection (Death/Rebirth) of the Antichrist (Snake and Fish).”

The rite of Memphis-Misraim is the Masonic rite that was known as the “Egyptian Freemasonry” because of its obsession with esoteric symbolism which was derived from Egypt. If you have seen Katy Perry’s Egyptian themed Illuminati video, been to the Egyptian theater in Hollywood, or watched Cleopatra, you will know Hollywood has always invoked this Masonic rite.

In 1923, after the passing of Theodor Russ as the ‘Universal Grand Hierophant’ for Memphis Misraim Masonry (the one with 33/99 degrees that claimed centralized authority over all Masons) Allister Crowley claimed the throne for himself but was rejected. He thus broke away, establish lodge 576 and what he called the New World Order.

Wow this was really deep thankyou for the knowledge

Wow this was really deep thankyou for the knowledge.

Interesting choice of words from the new owners:

“Over the years, I have developed a profound appreciation for Hollywood, its history, symbolism, and potential; those sentiments are uniquely reflected in the Ovation project. We are honored to offer the Hollywood community and visitors that make this city so special a glimpse of what is to come at Ovation.”
-Goodwin Gaw, Chairman and Managing Principal of Gaw Capital Partners (The Hong Kong and Los Angeles-based real estate private equity firm that purchased the Hollywood mall, in partnership with DJM).

Stenn Parton, Chief Retail Officer at DJM said, “An ovation is a sign of appreciation for someone’s work, talent, or effort. At Ovation Hollywood we applaud the creators, doers, teachers, doctors, entertainers and small business owners that make this community sing. During this tough time for the world at large, we want to create a place of recognition, celebration and coming together in search of what it means to experience one of the most iconic places in the world. Hollywood is as much an idea as it is a place.”

Amazing piece of research; in light of the embedded meanings of the mall, I think the message of the coming mind virus is extraordinarily clear in Goodwin Haw’s words.

holy s**t their symbolism is insane